“Communicating about science, and agriculture is not only about the job, but finding value in the work one does,” she said.

From a tender age, Nanteza knew the power of communication and wanted to be a communicator. Though she performed well in biology and chemistry in high school, her focus remained tuned to communications and journalism.

In her second year at Makerere University, Uganda’s premier institution of higher education, she began writing for the Daily Monitor newspaper to hone her reporting skills. After a few years in journalism, however, she realized she wanted to communicate information that would provide knowledge to change livelihoods.

And that, she knew, would require her to gain more skills in science communication. 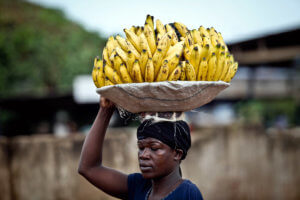 In 2012, Nanteza enrolled in an online master’s course in science communication at the University of Edinburgh in Scotland. The skills she gained there helped her land her job at with the National Banana Program (NBP), where she links the research institute to media, government and civil society organizations.

“These were things we had studied in class, controversy in science, so I was excited to be part of the team communicating about them,” she said.

To gain more skills in biotechnology communications, Nanteza participated in the inaugural Cornell Alliance for Science Global Leadership Fellows Program. She calls it a life-changing experience.

“It gave me an international platform,” she said. “It has broadened my understanding of agricultural biotechnology. It came at the right time.”

Nanteza is proud to be the one bridging NARO’s practical and academic research world with the ordinary farmer.

She particularly enjoys talking to farmers about new agricultural technologies and watching them change from skeptics to campaigners. They invariably immediately ask for the banana suckers and improved seeds that are being developed so they can plant them.

“They usually ask where we have been as they have been lied to for so long. Why did you not come earlier?” she recounts.

Nanteza said she has seen farmers’ lives change for the better once they adopt the new technologies.  “Small information results in great changes in farmers livelihoods,” she said.

Many agree with her. Vicent Mugabi, an extension officer in charge of Mbarara Municipality, praised Nanteza for updating him and other banana stakeholders on developments in banana research as they fight banana bacteria wilt.

“She is a very important person in giving us updates on research on banana including on agricultural biotechnology,” he said. “She supports us a lot in our extension work.”

Dr. Jerome Kubiriba, the program leader NBP, also spoke enthusiastically about Nanteza , noting she had been a powerful mobilizer, especially among Parliamentarians, in working to secure passage of the nation’s biosafety bill last year. Once the bill is signed into law, scientists can begin releasing GM crop varieties to farmers.

Of course, the work of communicating science does have its challenges.

Nanteza explained that she has come to accept that opposition to agricultural biotechnology has nothing to do with science, but with politics. She is disappointed in how long it takes to change policy, and also that Ugandans are being confused by people from outside the country who don’t experience challenges like banana bacterial wilt.

“I don’t know why our people listen to them,” she said.

So Nanteza keeps communicating, determined that the public and farmers receive accurate information about agricultural science.

Christopher Bendana is a science feature writer with Uganda’s leading Media, New Vision. He has reported on science issues for over 10 years and extensively on biotechnology in Uganda. Follow the Alliance for Science on Twitter @scienceally

This article originally ran at Cornell’s Alliance for Science and has been republished here with permission.

Survey completeness of a global citizen-science database of bird occurrence