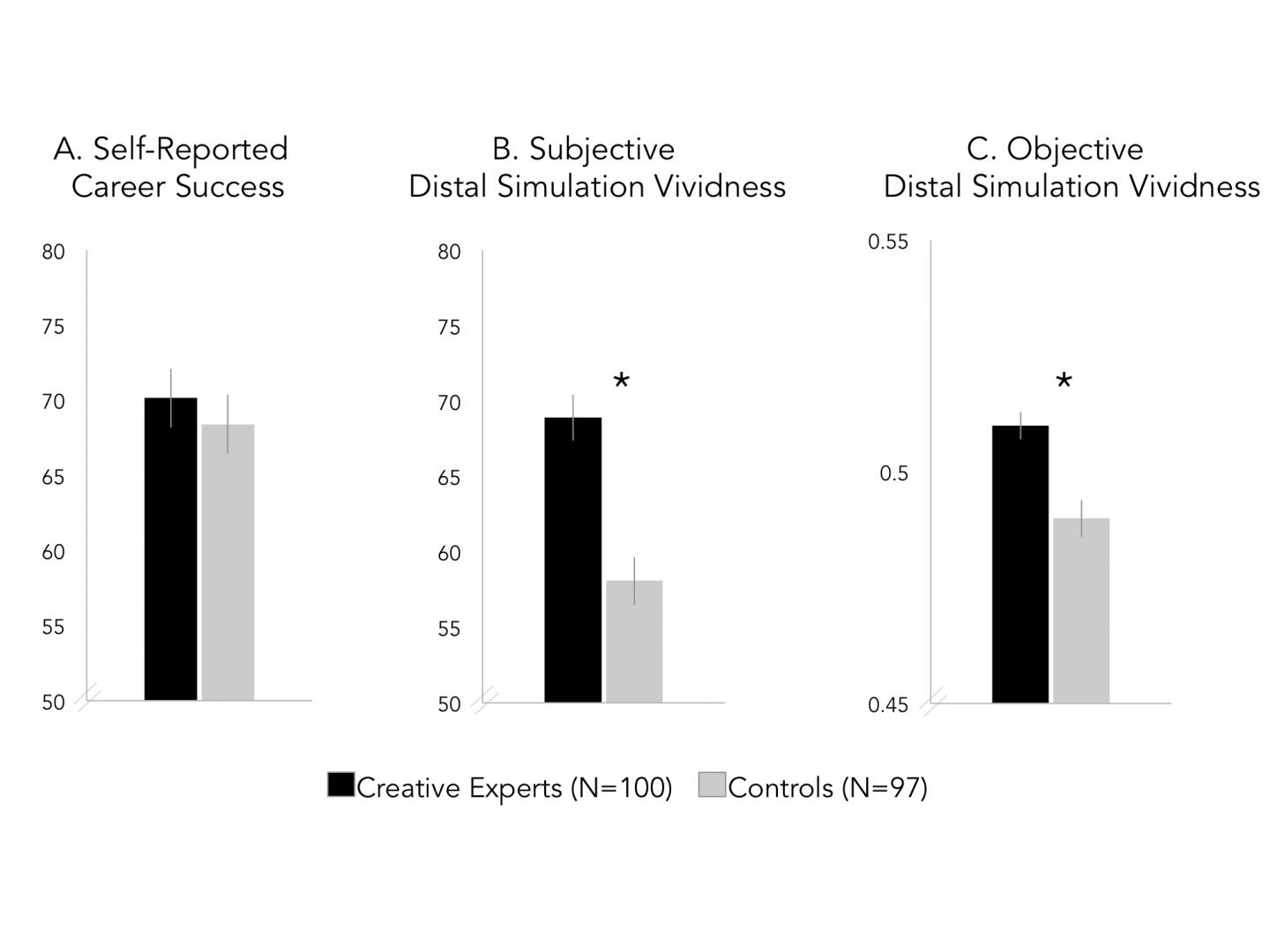 Humans use imagination a lot, whether it be thinking about what’s for dinner later tonight or trying to imagine what someone else on the other side of the world may be experiencing after reading the news. As situations become farther away from reality and more distal, imagining a situation becomes more difficult. The limits to distal imagination are known to lead to many biases, such as empathy gaps for people unlike us and difficulty saving money for a future that feels very far away. Yet, new work from a collaborative study led by Dartmouth College and Princeton University researchers finds that creativity may help us surmount these barriers to distal imagination. The results demonstrate that people with creative expertise are better at imagining distant experiences than others with otherwise similar demographics (age, education level, etc). The study also found that creative experts switch on a different neural system when imagining situations far beyond the present, which may help explain why they are better at stretching their imagination. The findings are published in the Journal of Personality and Social Psychology.

Imagining beyond the present or to what the researchers refer to as “distal imagination,” is integral to our ability to consider a different space and time. It’s also what enables us to empathize with others and to consider another person’s point of view.

“For most people, it is difficult to transcend the here and now, but creative experts are able to imagine distal experiences much more vividly than others. They draw on a neural mechanism, which other experts may not be able to engage as easily for this type of thinking,” explains lead author Meghan L. Meyer, an assistant professor of psychological and brain sciences, and director of the Dartmouth Social Neuroscience Lab, who was a post-doctoral fellow at Princeton University at the time of study.

To examine the relationship between creative expertise and distal imagination and to investigate the brain mechanisms that allow people to stretch their imagination, the research was comprised of three studies.

The first study investigated if there was a correlation between creativity and distal imagination. Approximately 300 participants were given a series of prompts across different domains (temporal, spatial, social and hypothetical) such as “imagine what the world will be like in 500 years” and were asked to write journal entries. They were also asked to rate how vividly they could imagine the different scenarios in their mind. A lexical analysis was performed on the written responses for creativity. Participants with higher creativity scores were better at distal simulation.

The second study was similar to the first but involved nearly 200 creative and non-creative professionals from a 50/50 split. The creative expert participants were writers, actors/directors and visual artists, who have received prestigious awards, such as a Macarthur Fellowship, New York City Film Festival Award, Sundance Screenwriting Award, or Guggenheim Award, and a control group of finance, legal and medical professionals. Through a link online, the participants were asked to complete a creativity test and to evaluate how successful they thought their careers have been. The test scores revealed that creative experts performed better on measures of distal simulation. “Creative experts and control participants showed the same level of career success. Yet, the creative experts demonstrated greater distal imagination. The results illustrate that it’s the creative pursuits and not just career success, which appears to enhance transcending the here and now,” adds Meyer.

In the third study, the researchers wanted to determine what the brain is doing differently that allows the creative experts to excel at distal simulation. Twenty-seven creative experts and control subjects were given prompts across time, space and social domains, to imagine both distal and proximal situations. An example of a proximal event would be something taking place within the next 24 hours, whereas, a distal event occurs 100 years from now. The results revealed that the brain activity of creative experts and controls is similar when imagining proximal scenarios such as what to have for breakfast tomorrow or what one’s own neighborhood looks like. For both groups, the medial prefrontal cortex was activated when visualizing proximal events. Previous research has demonstrated that this brain region is associated with proximal thinking, which includes thinking about yourself. But for distal prompts, there was a striking difference between the two groups. For distal events, creative experts turned on a separate system, the dorsal medial system default network, which has been associated with thinking about other people and is used for empathy.

The results were surprising to the research team, who had expected that creative experts use the same neural mechanism for distal simulation as for proximal but just use it better, when in fact, they use a different system of the brain altogether.

“Many of the problems facing our society today, whether it be identifying solutions to address climate change or working with others who may have different political views, are essentially challenges that require distal thinking. They demand that you get outside of your present point of view and try to think about how things could be different from your immediate experience. Identifying the underlying neural mechanisms associated with this type of imagination will hopefully help us better understand the key ingredients that may be needed to solve these kinds of complex, societal problems,” explains Meyer.

MannKind Corporation (MNKD) Stock: Is This Biotechnology Stock Worth Your Time?...