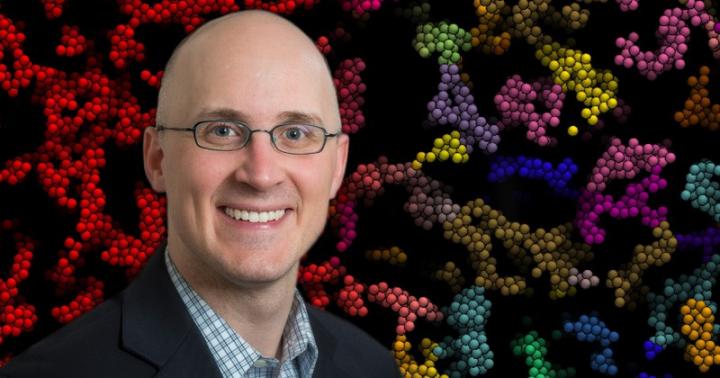 From the toothpaste you squeeze on your brush first thing in the morning to the yogurt you slurp down to the fabric softener that keeps your pajamas cozy and soft, gels are ubiquitous in consumer products, foods, and in industrial applications, too.

However, until now, scientists have been unable to explain the microscopic structures within gels that impart their elasticity, or springiness, nor how those structures form. A team of scientists from the University of Delaware, Massachusetts Institute of Technology, North Carolina State University and University of Michigan discovered that the elasticity of gels arises from the packing of clusters of particles in the gels, which the group dubbed locally glassy clusters.

This research, described in a paper published in the journal Nature Communications, could help people engineer better materials and products at the microscale. This insight could help companies in the consumer products, biotechnology, and agriculture sectors and beyond.

Many companies formulate and sell gel products, and sometimes, the stiffness of gels changes as a result of instability. Eric Furst, professor and chair of UD’s Department of Chemical and Biomolecular Engineering and one of the paper’s corresponding authors, keeps an old bottle of fabric softener on a shelf in his office and uses it to demonstrate what happens when gels separate or “collapse”. The product is supposed to be easy to pour, but when it goes bad, it becomes gloppy and unappealing.

“Our results provide insight into how to engineer cluster size distribution to control stiffness, flow, and stability of gel materials,” said Furst.

The first author of the new paper is Kathryn A. Whitaker, who received a doctoral degree in chemical engineering from UD in 2015 and is now a senior research engineer at Dow in Midland, Michigan.

Gels are semi-solid materials that flow like liquids but contain solid particles, too. When scientists examine these substances under a microscope, they see that the solid particles within gels form a network, like the structure of a building. To make the substance flow so that you can squeeze it or spread it thin, you need to break that structure. When this requires a lot of force, the substance is stiff and has a high elastic modulus. When less force is required, the substance flows easily and has a lower elastic modulus.

The research group led by Furst studied a gel made of particles of poly(methylmethacrylate) latex (PMMA), commonly known as acrylic, dispersed in a mixture of two colorless liquids, cyclohexane and cyclohexyl bromide. They found that this gel was composed of glassy clusters of particles connected to each other with weak areas in between. To understand how these clusters contributed to the gel’s properties, the team wanted to determine the boundaries where each cluster began and ended.

“This is like Facebook,” said Furst. “We were trying to figure out — who is connected locally to whom?”

Collaborator James W. Swan, assistant professor of chemical engineering at MIT, conducted simulations to explore the physics behind the clusters. He then applied graph theory, the mathematical study of graphs, to the simulation data to figure out which clusters connected to each other, identify the edges of each group and color-code the clusters. It was like defining the boundaries of intermingling friend groups.

Next, the researchers compared the simulation results to physical studies of the gels and confirmed that the connections and distributions matched their predictions. They determined that the way these locally glassy clusters pack together determines the material’s elastic modulus. The interconnected clusters act as rigid, load-bearing units within the gel.

“Until now, no one had seen and described how these clusters packed and how they affected elasticity,” said Furst. “We brought the puzzle together.”

The paper’s authors also include Zsigmond Varga, a process development engineer at ExxonMobil; Lilian C. Hsiao, an assistant professor of chemical and biomolecular engineering at North Carolina State University and Michael J. Solomon, a professor of chemical engineering and Dean and Vice Provost for Academic Affairs, Graduate Studies, Rackham Graduate School at the University of Michigan.

This paper was years in the making as the investigators followed up on lingering questions that bothered them and prompted them to keep working.

“This discovery was the result of the teamwork of the principal investigators, the experimental skills of our students, and the passion and tenacity we all brought as we worked through this problem,” said Furst.

UD offers a unique master’s degree in particle technology through the Department of Chemical and Biomolecular Engineering.

A drug to treat harsh complications of coronavirus infection is registered...