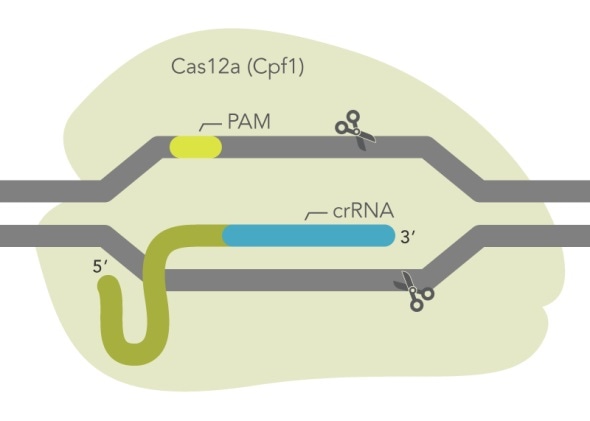 Publication of the Cas12a system in 2015 generated considerable interest among researchers seeking new enzymes for genome editing experiments, particularly due to its unique PAM site (“TTTV”) that greatly expanded the number of potential editing sites in the genome beyond that of Cas9 (“NGG”). IDT developed a novel mutant of the Acidaminococcus sp. BV3L6 Cas12a (Cpf1), called Cas12a Ultra. The new mutant enzyme has enhanced editing activity, reaching or exceeding the performance of Cas9. The new Cas12a Ultra also retains activity across a wider temperature range than the wild type enzyme, making it useful for genome editing in additional organisms, including plants.

Editas Medicine, a leading company developing genome editing medicines, recognized the potential advantages of the newly discovered Cas12a (also known as Cpf1) system and obtained an exclusive license from the Broad Institute, Inc., acting on behalf of itself and the President and Fellows of Harvard College, the Massachusetts Institute of Technology, Wageningen University, and the University of Tokyo in 2016 for human therapeutics. Editas Medicine also signed an exclusive license from IDT for use of Cas12a Ultra in human therapeutic applications, several months prior to IDT’s commercial release of the product for research use.

IDT’s Alt-R Cas12a (Cpf1) Ultra is a first addition to the genome editing toolbox that offers the same efficiency and versatility as Cas9. The new tool will find equal utility for both knock-out as well as knock-in applications, in fields ranging from basic research cell engineering to medical gene therapy to agricultural biotechnology. By incorporating Cas12a (Cpf1) Ultra from IDT into their research plan, scientists will also benefit from the exceptional quality of IDT’s recombinant genome editing protein manufacturing, high throughput guide RNA synthesis capacity, and best-in-class technical support.

We are proud that IDT continues to take the lead in developing and supplying innovative CRISPR tools to the research community. Alt-R Cas12a (Cpf1) Ultra is a powerful example of this. Researchers will really benefit from the efficiency and versatility that it brings to their gene-editing projects.”

Discovery heralds a new strategy in the hunt for antibiotics