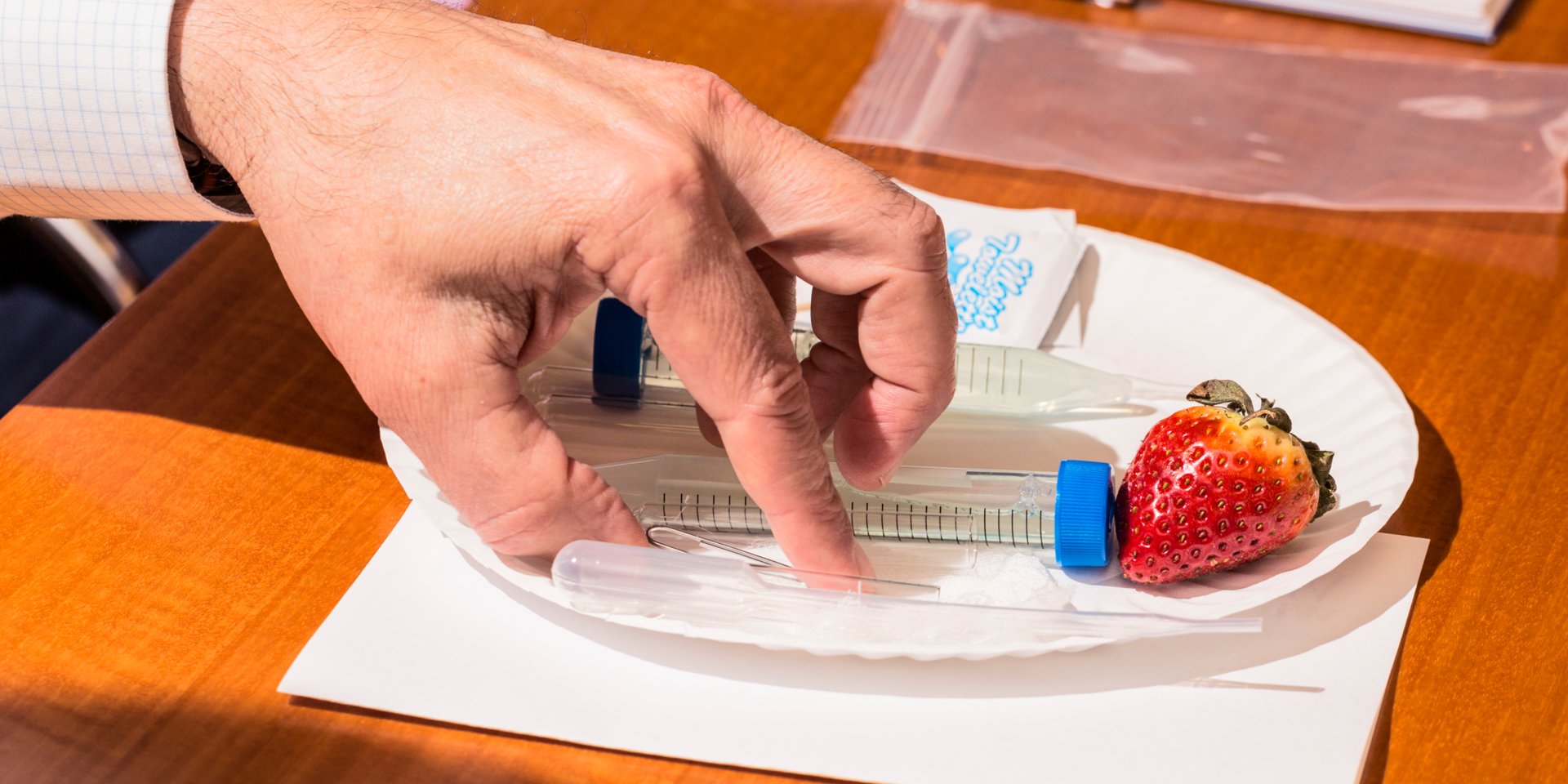 On a recent weekday morning in midtown Manhattan, a conference room full of buttoned-up professionals from some of the world’s biggest healthcare companies and financial firms were mashing up strawberries into a pulpy froth, giggling as they worked.

Not exactly your typical Wednesday at work.

“It’s supposed to look like a smoothie, but don’t drink it,” the instructor, Collins Jones, said. “Some of you are really getting into this.”

As part of the “Biotech for Non-Scientists” class, attendees participate in a lab to learn about DNA. Hollis Johnson/Business Insider

Then something new appeared in the glass test tubes, filmy, white, and decidedly snot-like. Strawberry DNA, the instructor explained: millions of strands of it, all clumped together.

“Get out,” someone exclaimed loudly.

Welcome to ” BioBasics: Biotech for Non-Scientists,” an in-person, two-day course that walks the armies of finance types, human resource managers, and web designers employed by or around the vast biopharma industry through the science at its core.

On any given day, the $1,325 class might include chief financial officers, human resources managers, big pharma board members and web designers alike, with attendees flying in from places as far flung as Malaysia and Denmark.

Many of the students haven’t been in a science classroom since high school. One recent participant came on the recommendation of a colleague, who had described it as “life sciences for dummies.”

The class is put on in conference rooms all around the US by the Maryland-based company Biotech Primer. The idea came to founder Stacey Hawkins nearly 20 years ago, while she was at a biotech conference in San Diego.

A onetime high school science teacher, Hawkins had realized that, as a wave of intricate new drugs with complex science emerged, even people in the industry were having a hard time getting their heads around it.

“Coming from this educational background, it just seemed like there was this educational gap and that I might be able to fill it,” Hawkins said. Biotech Primer’s introductory class is most commonly home to students on the business side of biopharma, who work each day with scientists and need to better understand what they do, as well as bankers, analysts, and employees for venture capital firms, she said.

‘A problem throughout the healthcare industry’

You might think that workers in an industry centered on cutting-edge science wouldn’t need a refresher about how a cell works and what DNA is.

But that’s not the case at all, said instructor Kevin Curran. Curran, who previously worked in research labs for about 20 years, says that even after a few years of teaching Biotech Primer classes, it always surprises him “how much people benefit from a review of basic cell biology.”

And though biopharma companies are chock full of scientists, not all have the ability, time or willingness to explain concepts simply, he said.

The first day of “Biotech for Non-Scientists” hones in on those basics, while the second day plugs those concepts into contemporary science, like cutting-edge ways of treating genetic disease, and the latest drugs changing the way cancer is treated.

Hallmarks of the class are the strawberry lab, a thick binder of the class’s PowerPoint slides that attendees can take home, and plenty of coffee.

“You’ve got to keep the coffee going,” Curran says. “Number one is don’t let the coffee run out. Genomes, genes — no way you’re going to get to CRISPR at 3 p.m. without coffee and cookies,” he said, referring to a type of precise gene editing that could be used to treat disease.

Read: Drug giant Merck just bought a biotech for $773 million, and it reveals the company’s strategy for keeping on top in cancer treatments

Business Insider sat in on a Biotech Primer class in May. Other attendees worked for companies like Pfizer, Johnson & Johnson, the biotechs United Therapeutics and MeiraGTx, the investment bank Evercore, and a small life sciences venture capital firm.

Those kinds of big healthcare names are par for the course, alongside other big pharmaceutical companies like Merck, Bristol-Myers Squibb and Roche. The head of a department might say, for instance, that all new hires should go through the course, since they “don’t want them to get like a deer in headlights every time someone talks about genes and proteins,” Curran said.

For others, the class can serve to explain or link ideas they’ve come across before at work, said Emily Burke, Biotech Primer’s head of curriculum.

“People know that our company does immunotherapy, or our company is interested in precision medicine. I’ll give specific examples, and they’ll say, ‘I always hear that,’ or, ‘now I really understand,'” she said. Attendees say that they may have known a term, but “didn’t understand how that applied to our drug.”

This reporter, who has been covering healthcare for more than three years, found the class incredibly interesting, because it casts a wide net in a vast field. But the course was also dense and, at times, overwhelming.

Some attendees were very engaged, peppering the teacher with questions and even saying they wished he had taught them science in high school. Other faces had disappeared by day two.

In addition to around 30 in-person courses like “Biotech for Non-Scientists” each year, Biotech Primer also teaches about 100 similar, in-house classes at companies, which can be tailored to what they and their competitors do. Other offerings include advanced classes on subjects like drug development, as well as online courses.

The company does have competition, including comparable classes offered by other groups; some biopharmaceutical companies also offer in-house training classes.

Teachings that took me back to high school

Attendees at a Biotech Primer class in May. Hollis Johnson/Business Insider

There are challenges inherent in the very premise of a science class surveying a rapidly-changing industry.

“I swear it changed last week,” founder and CEO Hawkins said when we spoke on the phone in April. When the company first got going, stem cells were a hot, emerging technology; that’s no longer the case, she said.

Drugs that harness the body’s immune system to fight cancer and other diseases, meanwhile, are “now all of a sudden the next big thing,” she said.

Teaching an introductory course to a cross-section of industry also means meeting people where they are, a careful balancing act in a field like science.

When I took the class in May, we covered the concept of chemical formulas for molecules, like H 2O, early in the first day. It felt like a blast from my teenaged past.

“Is this bringing up painful memories for some of you?” the instructor, Jones, asked. “I’m sorry.”

Helpfully, Jones made a point of emphasizing both where the science is today and its promise in the future, as well as pointing out areas that could prove a business opportunity. He used physical props throughout the class, as well as metaphors to make concepts friendlier and more accessible.

One attendee, Alia Elgeziry, who started in human resources at a Boston area biotech company earlier this year and is new to the field, said she found it more like a senior level biology college class than the introduction to the industry that she had hoped for.

Others said the class has helped them makes sense of concepts they’ve encountered but never understood.

A woman sitting next to me said that the class had taught her, for instance, why she wasn’t supposed to shake the drugs she took for in vitro fertilization (it destabilizes them). And learning that individuals metabolize drugs differently made her realize why she sometimes needs to take higher doses, like at the dentist, she said.

Department of Biotechnology approves funding for 3 companies for developing COVID-19...

Women caught in a pickle by their own immune systems