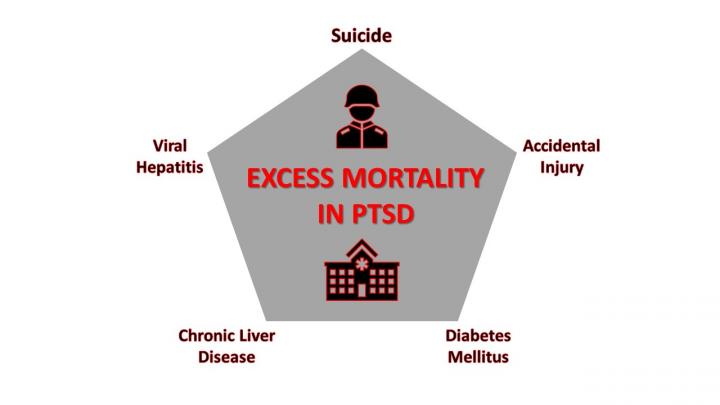 A new study in the American Journal of Preventive Medicine identifies and stratifies the mortality risks by age group, providing valuable insights for guiding prevention and treatment efforts

This retrospective cohort study identified the leading causes of death among 491,040 Veterans who initiated PTSD treatment at any Department of Veterans Affairs Medical Center from 2008 to 2013; 5,215 of them died within the first year of care. The mean age was 48.5 years, 90.7 percent were male, 63.5 percent were of white race, and 34.9 percent served in the wars in Iraq and Afghanistan.

Causes of death during the first year of treatment were grouped according to age (18-34, 35-64, and 65 or older). To statistically compare the observed mortality among Veterans in PTSD treatment with the general population, standardized mortality ratios were calculated from age- and sex-matched mortality tables of the 2014 US population.

Because of advances in medicine and technology, Veterans who served in recent conflicts are more likely to survive combat injuries than previous generations. As a result, the prevalence of PTSD, pain disorders, and opioid use has increased among survivors. As Veterans with PTSD and comorbid pain may be at increased risk of opioid use disorder, the investigators posit that opioids may play a role in accidental injury, suicide, and hepatitis-related deaths, especially in young Veterans with PTSD. Understanding the complex nature of PTSD and its associated mortality risks is important for developing targeted interventions in this age group.

“Future studies should develop preventive interventions that target PTSD and comorbid depression, pain disorder, and substance use to lessen the risk of suicide, accidental poisoning, and viral hepatitis in Veterans with PTSD. Similarly, lifestyle modifications may reduce the risk of diabetes and chronic liver disease in this patient population. Veterans seeking treatment for PTSD should receive comprehensive education on the benefits of diet and exercise and the risks of chronic stress and substance use,” commented Dr. Forehand.

Looking to Start 2020 With a New Job? These Companies Are...