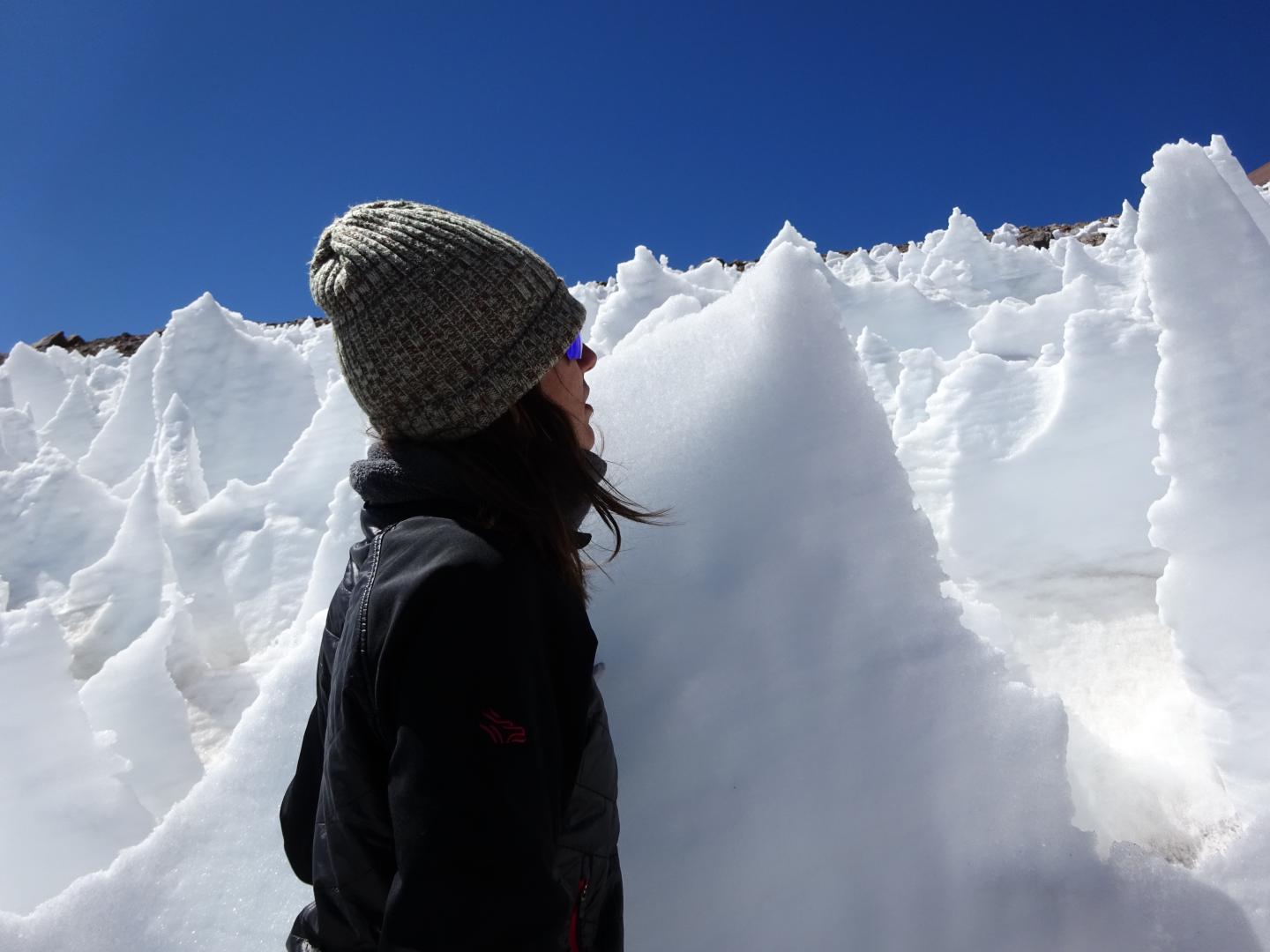 High in the Andes Mountains, dagger-shaped ice spires house thriving microbial communities, offering an oasis for life in one of Earth’s harshest environments as well as a possible analogue for life on other planets.

The distinctive icy blade formations known as nieves penitentes (or, “penitent ones”) are named for their resemblance to praying monks in white robes and form in cold, dry conditions at elevations above 13,000 feet. The penitentes, which can range from a few inches to 15 feet high, are found in some of the most hostile conditions on Earth, with extreme winds, temperature fluctuations and high UV radiation exposure due to the thin atmosphere.

And yet, as a recently published study led by University of Colorado Boulder student researchers finds, these spires offer shelter for microbes by providing a water source in an otherwise arid, nutrient-poor environment.

In March 2016, CU Boulder students and faculty members traveled to Volcán Llullaillaco in Chile, the world’s second-highest volcano. The two-week expedition into the arid landscape, planned in collaboration with their Chilean colleagues, was no easy feat.

“This is a very remote area that’s difficult to access,” said Steve Schmidt, a professor in CU Boulder’s Department of Ecology and Evolutionary Biology (EBIO) and a co-author of the study. “The entire back of one of our pickup trucks had to be filled with barrels of drinking water. It’s no trivial thing to go out there, and that’s one of the reasons these formations haven’t been studied much.”

After reaching the penitente fields at 16,000 feet above sea level, the scientists noticed patches of red coloration, a telltale sign of microbial activity that has been previously observed in other snow and ice formations around the world.

Upon bringing back samples for analysis, the researchers confirmed the presence of algal species Chlamydomonas and Chloromonas in the ice, the first documentation of snow algae or any other life forms in the penitentes.

“Snow algae have been commonly found throughout the cryosphere on both ice and snow patches, but our finding demonstrated their presence for the first time at the extreme elevation of a hyper-arid site,” said Lara Vimercati, lead author of the study and a doctoral researcher in EBIO. “Interestingly, most of the snow algae found at this site are closely related to other known snow algae from alpine and polar environments.”

The new findings add to scientists’ understanding of the limits of life on Earth, but may also have implications for the search for alien life. Penitente-like formations have recently been discovered on Pluto and are speculated to exist on Europa, one of Jupiter’s moons. The Atacama region in Chile is also considered to be the best Earth analogue for the soils of Mars.

“We’re generally interested in the adaptations of organisms to extreme environments,” Schmidt said. “This could be a good place to look for upper limits of life.”

“Our study shows how no matter how challenging the environmental conditions, life finds a way when there is availability of liquid water,” Vimercati said.

Should You Invest in the Invesco Dynamic Biotechnology & Genome ETF...