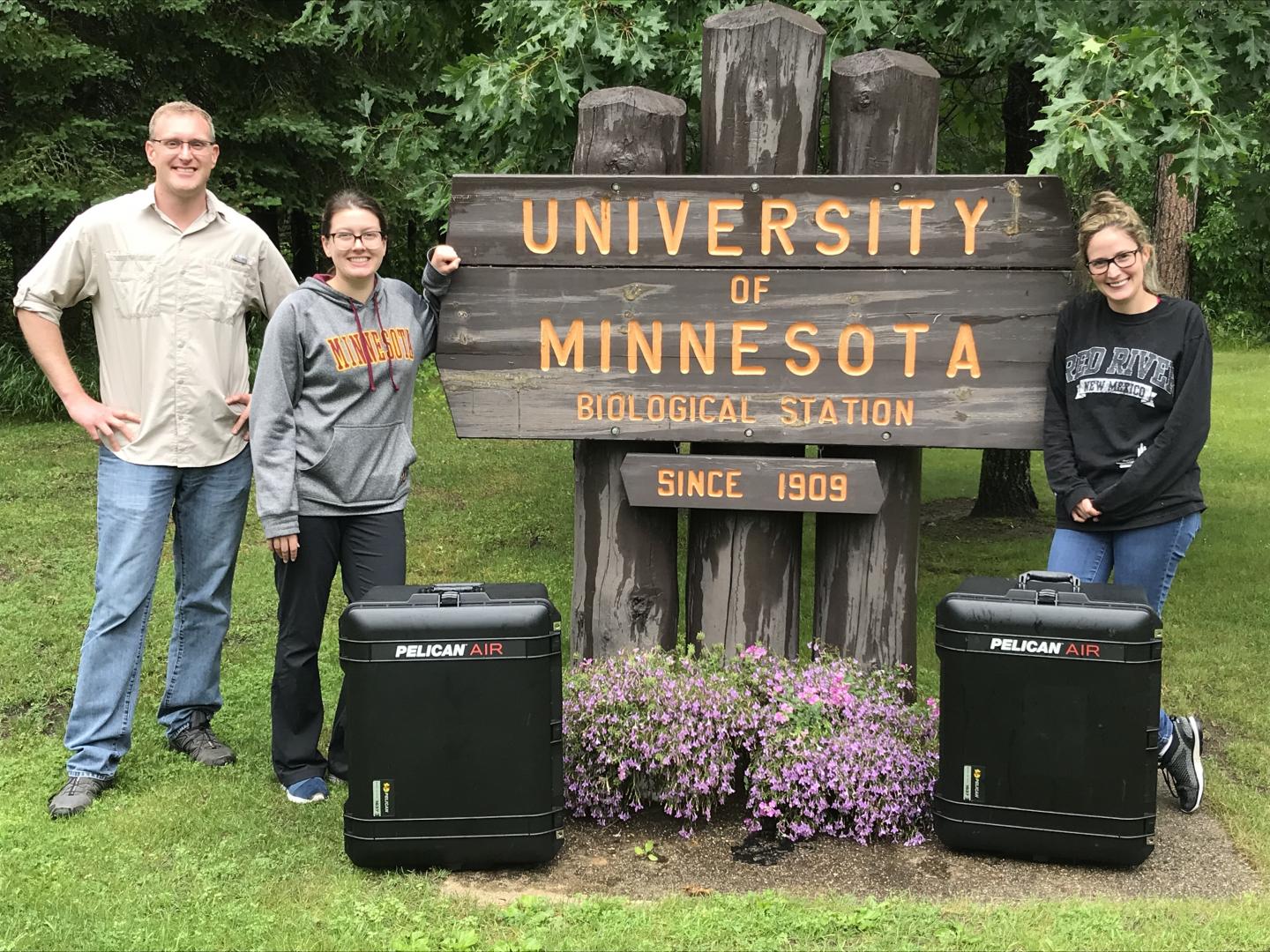 University of Minnesota researchers have refined testing methods for tick-borne diseases in the field by using a new, deployable mobile laboratory and performing genetic sequencing of key pathogens to better understand how they move, evolve and function. The U of M research team based in the College of Veterinary Medicine (CVM) is one of the first in the U.S. to use this technology for tick-borne pathogens in this specific way.

Consisting of Peter Larson, assistant professor in the Department of Veterinary and Biomedical Sciences in CVM; Kenwyn Shriner, a second-year Doctor of Veterinary Medicine and Master of Public Health student at CVM; and Laramie Lindsey, Ph.D., a postdoctoral associate in the Larsen lab, the research team recently visited Itasca State Park in northern Minnesota where they collected 50 ticks from the woods.

After collection, the team assembled their mobile lab to test the various species of ticks for Borrelia, the bacteria responsible for Lyme disease. The entire lab fits into just two, medium-sized suitcases and plugged easily into a single power strip in the University of Minnesota’s Itasca Biological Station and Laboratories.

“Everything you see here can run on battery packs, too,” says Larsen. “So, if we wanted to test for disease in a more remote location, we could easily do that in real time.” According to Larsen, the effort in Itasca is “ground truthing” the efficacy of his team’s approach before the team heads to Borneo, Malaysia, in August to use the mobile lab to test and better understand emerging foodborne pathogens in small mammals, such as rodents, which are reservoirs of zoonotic disease.

“The region we are going to is in some of the oldest rainforest in the world,” says Shriner. “It’s an area where there is a lot of ecological diversity that is unexplored because the infrastructure of gathering samples in the rainforest, keeping them cool, and transferring them back to a traditional lab is too high of a barrier. Now, we can access so much by bringing the lab into the rainforest and produce data. More importantly, we’ll create relationships with the students and professors working in Malaysia and start an international collaboration that hopefully lasts for many years to come.”

“I think that as time goes on, you are going to hear more and more about how the miniature technologies we are using will be used for research, education, and outreach efforts,” says Larsen. “But it’s still in its infancy. So, this project is especially novel in the sense that we are able to collect ticks on one day and spend the next day confirming presence or absence for Lyme disease and then sequence the DNA of the pathogen to understand its genetic make-up.”

Not only has the Larsen lab increased biological access to testing an endless number of diseases, they have also streamlined the process of the testing itself. Previous to Shriner’s expertise and Larsen’s high-end technology, the process for performing a similar test on ticks in a traditional lab would have taken at least three days, not to mention how long it could take for a scientist to ship samples and then wait in a lab’s queue for the test to be performed. Now, the Larsen lab is getting DNA sequencing results from individual ticks in less than 12 hours.

The approach the Larsen lab has refined could help mitigate a wide range of emerging threats. “The true power of the mobile lab is that it doesn’t matter if it’s Lyme disease, Ebola in Africa, or African swine fever on swine farms–the possibilities are applicable for any molecular diagnostics in the field,” Larsen says. “All of this is part of a bigger picture to address emerging threats as they evolve.”

About the College of Veterinary Medicine