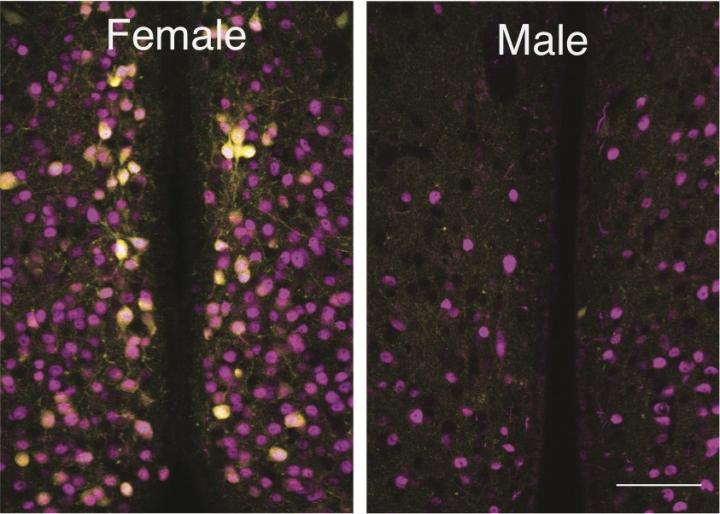 Oxytocin is widely referred to as the love hormone and plays an important role in the regulation of social and maternal behavior. In recent years, the oxytocin system in the brain has received tremendous attention as key to new treatments for many mental health disorders, such as anxiety, autism spectrum disorders and postpartum depression. New research led by a biologist and his students at LSU have discovered a group of cells that are activated by oxytocin in one area of female mouse brains that are not present in the same area in male mouse brains.

“Many researchers have attempted to investigate the difference between the oxytocin system in females versus males, but no one has successfully found conclusive evidence until now. Our discovery was a big surprise,” said Ryoichi Teruyama, LSU Department of Biological Sciences associate professor, who led this study published in PLOS ONE.

“I think our discovery could be universal to all mammals that exhibit maternal behavior, including humans,” Teruyama said.

Study co-author Ryan LeBlanc from Denham Springs was an undergraduate student researcher at LSU whose work was instrumental to this discovery. However, he had little previous research experience before joining Teruyama’s lab.

Teruyama recalled that when LeBlanc first approached him to be his mentor, he asked him about his hobbies. LeBlanc said he liked to build plastic models of battleships.

“I certainly don’t know much about battleship plastic models, but anyone who can assemble 500 to 2,000 plastic parts into models must be persistent, focused and exceedingly careful. I accepted him gladly thinking he is going to find something extraordinary, and I was right,” Teruyama said.

LeBlanc took on the tedious task of finding and marking the exact location of thousands of oxytocin receptor cells with a red pen. He spent more than a month identifying the cells, which was instrumental to this discovery.