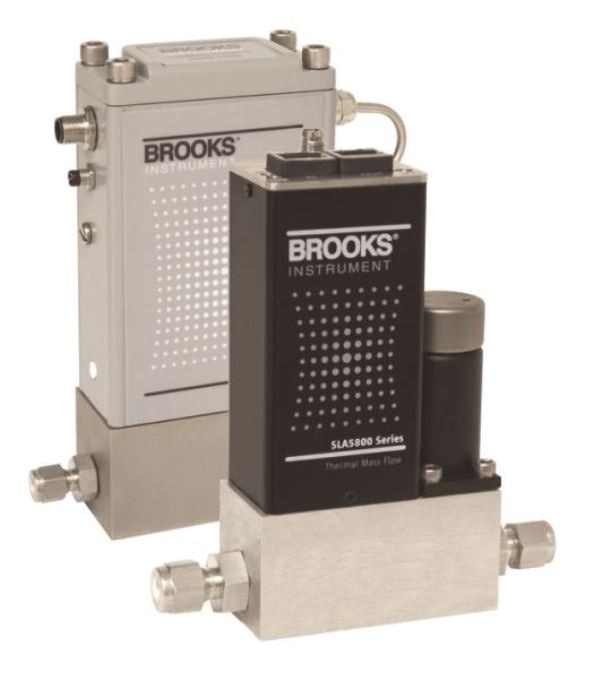 Using the new performance-level SLA5800 Series Biotech MFC or the SLAMf Series Biotech MFC, manufacturers of biotech equipment can potentially reduce the number of MFCs they need for their equipment, allowing them to simplify their designs and reduce system costs. For end-users, the new MFCs will allow them to reduce purchasing complexity and spare parts inventory requirements.

Reduced system cost: The devices have a turndown ratio of 250-to-1 on flow rates of 5 sccm to 150 slpm and 150-to-1 for higher rates. The higher ratio allows the SLA Series Biotech MFCs to accommodate a wider range of gas flows, thereby eliminating the need for separate low-flow and high-flow devices to cover the requirements of a typical biotech application.

Full shut-off valve: The SLA Series Biotech MFCs also have an enhanced control valve with a leak rate of 0.005 sccm for flow rates between 5 sccm and 150 slpm, and a rate of 15.6 sccm for higher flow rates. The low leak rate potentially eliminates the need for a separate shut-off valve in the gas delivery system, reducing component purchasing costs and saving engineering, testing and validation time.

Multi-range, multi-gas capabilities: The Brooks Biotech Series MFCs can control up to four different gas flows, including air, carbon dioxide, nitrogen and oxygen. The MFC user can select any of these gasses using Brooks BEST software or through digital communications. This combination of high turndown ratio and multi-gas, multirange functionality allows system designers to reduce the number of MFC configurations by up to 90 percent.

The premium versions of both platforms also include additional support for emerging regulatory requirements for materials used in bioprocessing systems. They have USP, FDA and ADI-free O-rings and valve seats and a 2.2 certification for materials of construction (wetted path), plus NIST/ICC gas-specific calibration certification for traceability.

In addition, all SLA5800 Series Biotech MFC packages are available with an interface for the high-speed EtherNet/IP™ digital communications protocol, which enables exclusive real-time MFC diagnostics and provides a pathway for predictive modelling and analytics. EtherNet/IP™ will be available on the SLAMf Series Biotech in September 2019. Other communications options for both series include DeviceNet™, Profibus® and RS-485, as well as EtherCat® for the SLA5800 Series Biotech.

Studying the development of ovarian cancer with organoids

Why a Dose of Dirt May Help Protect against Stress