Now a new supercooling technique for human organs promises to extend the period from the moment of removal to 1.5 days rather than just a few hours. This provides a useful window of time within which transplant teams and patients can hope to get a viable organ.

The human transplant program is always sharply limited by the unpredictable availability and severe shortage of hearts, livers and kidneys, usually from accident victims. According to Harvard scientists, the availability of organs for transplant could avert almost a third of all deaths.

Even in highly developed medical systems like those in the US, organs that become available need to be transported from the site of harvesting to the site of transplantation, which may be far apart, within a very narrow time window. Until now, a liver, for instance, could be safely stored outside the body for only up to 12 hours at 4 0C. Failing this, the organs are rendered nonviable since they are stored without freezing. Thus, air transfer is required to get the donor organ to the recipient. Typically, the recipients have to undergo emergency surgeries at a moment’s notice. 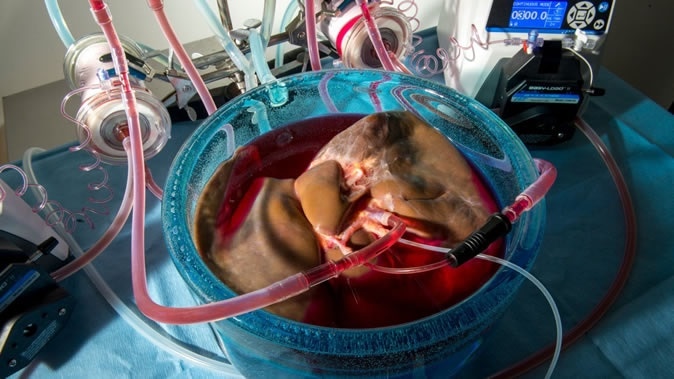 The issue is the sensitivity of human tissue to freezing-induced ice crystal formation, which damages living cells irreparably. One expert, Seila Selimovic, says, “Delivering viable organs to matching recipients within the window of viability can often be the most challenging aspect of organ transplantation.” This is avoided by the new technique in which water is cooled to -6 °C (21 °F) but doesn’t pass through the freezing phase. This was first attempted successfully in rat livers, which are far smaller than human livers at 200 times their size. Preserving the latter is therefore a far more difficult task.

The apparently impossible has now been done using a mixture of antifreeze chemicals to perfuse the liver to reduce the freezing point below 0 °C and then accomplish uniform cooling throughout the organ, allowing them to hibernate or enter suspended animation. Suspended animation simply means that all the cellular and intercellular processes that sustain life proceed, but at an extremely low or undetectable level. When the liver is to be used, it is slowly transfused with warm blood to thaw it gradually.

The protective mixture includes a glucose derivative called 3-OMG, and PEG-35kD, with other ingredients. While this was already followed with rat livers, the protocol needed to be tweaked a bit to prevent ice crystals from forming in the tissue. Researcher Reinier J. de Vries says, “With supercooling, as the volume increases it becomes exponentially more difficult to prevent ice formation at sub-zero temperatures.”

The first additional step was to keep air away from the liquid in which the organ is stored. The organ is immersed in a storage bag from which air has been removed to prevent ice crystal formation at the sites where air and liquid come in contact. Secondly, the scientists added a sugar called trehalose which stabilizes the cell membranes and protects the cells, and the fatty acid glycerol which enhances the protection conferred by 3-OMG to the protective solution. These are already used to preserve cells cryogenically for laboratory use.

The third step involved the actual delivery of the cooling solution to the liver. In contrast to the conventional manual flushing of the liver, they used machine perfusion to keep the tissue alive and healthy by supplying oxygen and nutrients through the capillaries. The machine first perfused the tissue with traditional protective solution at 4 degrees, and then reduced the temperature while shifting the composition of the fluid towards the new protective solution. They did it this way to avoid damage to the endothelium of the blood vessels because of the increased thickness of the new solution. Using a slower approach gave the liver tissue time to adapt and allowed the solution to evenly perfuse all tissues.

The livers preserved this way show no negative fallout from this modified procedure when evaluated by conventional standards.

Since they are not frozen, the organs still have a restriction on how long they can be safely kept, but work is on to extend the safe storage period a little more. The same technique can be used on kidneys or hearts, but not with the lungs which contain a large amount of air.

The new technique was tested out on three livers that had been removed for transplant but were in poor condition. Gratifyingly, all three apparently recovered when blood at body temperature was passed through their blood vessels, and bile began to flow from the bile duct.

Machine perfusion has already been used to preserve a viable organ. By means of an artificial circulatory system, blood at room temperature is kept flowing through a live beating heart isolated from the body or bringing back blood circulation successfully in the brain of a dead pig. Thus, this appears to be an important option in transplant surgery provided the organ can be preserved in a viable state for a useful length of time.

The study was published in the journal Nature Biotechnology on September 9, 2019.

Moving Forward after Two Deaths in a Gene Therapy Trial of...