A diagnostic device measuring chemicals in the breath, developed by the Dutch company Breathomix, was able to identify lung cancer patients that wouldn’t respond to cancer immunotherapy with unprecedented accuracy.

Researchers at the University of Amsterdam tested the device on 143 lung cancer patients, who were going to receive immunotherapy in the form of the checkpoint inhibitor drugs Opdivo and Keytruda. After three months, the breath test was able to predict which patients would fail to respond to the immunotherapy with an accuracy of 85%. According to the study, published in the journal Annals of Oncology, this was significantly higher than the accuracy of current diagnostics, which involve taking blood or tumor biopsies.

“The current standard in our study for identifying nonresponders reached an accuracy of 66%,”  said Rianne de Vries, one of the lead researchers at the Academic Medical Center in Amsterdam, and COO at Breathomix. “This means that the exhaled breath analysis is more accurate, quicker and much less invasive for the patient.”

The test works by measuring the presence of types of volatile chemicals in the breath of patients. The composition of these chemicals in the breath is determined by a range of environmental factors, and can also be altered by the presence of tumors. After Breathomix’s test detects the chemical levels, the data are sent to an online tool that can determine the ‘signature’ of the patient’s breath, and send the information to the doctor’s office within minutes. “Notably, this is comparable to the powerful mammalian olfactory system,” de Vries told me. 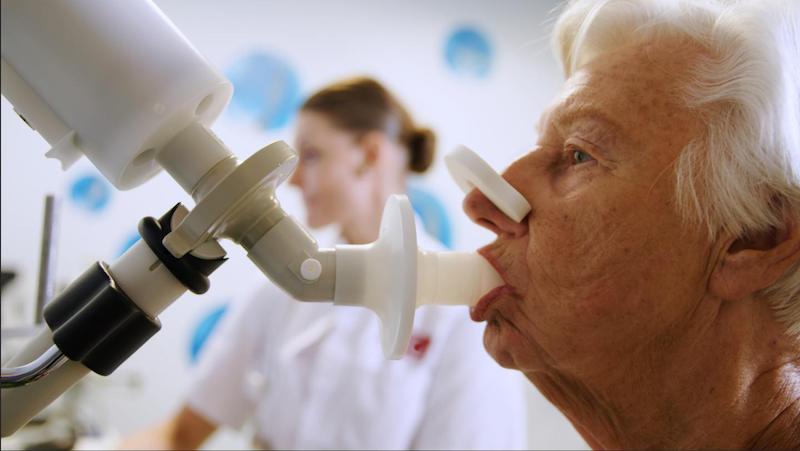 A patient giving a breath sample to Breathomix’s ‘electronic nose’.

Checkpoint inhibitors including Opdivo and Keytruda have caused lots of hype in the biotech industry. However, this form of immunotherapy is only effective in a small percentage of patients. What’s more, the treatments are pricey and can cause serious side effects such as inflammation. Having a quick and accurate method to screen patients who won’t respond to checkpoint inhibitors could mean that fewer people wrongly receive these immunotherapies.

One major player in cancer breath diagnostics is the UK company Owlstone Medical. In contrast to Breathomix, Owlstone measures volatile chemicals in the breath using a technique called mass spectrometry. While good for studying cancer, this technique is too slow and expensive for clinical use, de Vries told me.