Infertility is a very potent cause of frustration and psychological problems such as anxiety and depression, as well as of high stress. Infertility or subfertility is defined by the World Health Organization as unsuccessful attempts to conceive for five or more years.

While it is a fairly common problem, affecting 10% of women, the emotional and mental impact can be easy to overlook. A new project is aimed at developing a simple and convenient method of tracking the menstrual cycle so as to take advantage of their fertile period to enhance their chances of conception.

What is the fertile period?

During the menstrual cycle, one of the two ovaries, typically in alternating fashion, gets ready to release one of its eggs. The actual release, or ovulation, occurs towards the middle of a 28-day cycle, and the egg travels through the fallopian or uterine tube towards the uterus. Once the ovum or egg is released, its survival is short (approximately 24 hours), and thereafter conception cannot occur for the remainder of that cycle. Sperms, however, can survive in the female reproductive tract for up to 7 days. Fertilization by a sperm must therefore happen within the 5-6 days leading up and including the actual day of ovulation – the window of opportunity.

For many women, it is vital to identify this fertile time window, but difficult because of the varying length of the menstrual cycle from month to month – a phenomenon seen in up to 80% of women. Physiological markers of ovulation are well-described but may be difficult to pick up for the untrained woman at first. The underlying events are due to peak levels of two hormones, estrogen and luteinizing hormone (LH). These can be picked up to detect the fertility peak reliably and reproducibly.

Many ovulation kits have been brought out to identify ovulation by measuring hormone concentrations, and most of them are based on the use of blood or urine. The majority assess LH levels and can only answer Yes or No to the question of whether ovulation is occurring or not.

A team of students at the University of Copenhagen are trying hard to develop a hormone-detector built into a piece of chewing gum. The students are drawn from the biotechnology and molecular bioscience fields, and are working with a mission on the project, which was conceived as an entry in iGEM, the world synthetic biology competition that will take place in Boston towards the last part of October. They feel that a living biosensor, in the form of a yeast molecule, embedded inside chewing gum, will provide a comfortable and easy method of hormone assay which also allows the woman to understand what is going on at various parts of her cycle, and not just identify ovulation. The biosensor is meant to have LH receptors as well as estrogen receptors. The increase in estrogen levels in the week preceding ovulation is an important physiological phenomenon and indicator of this event. 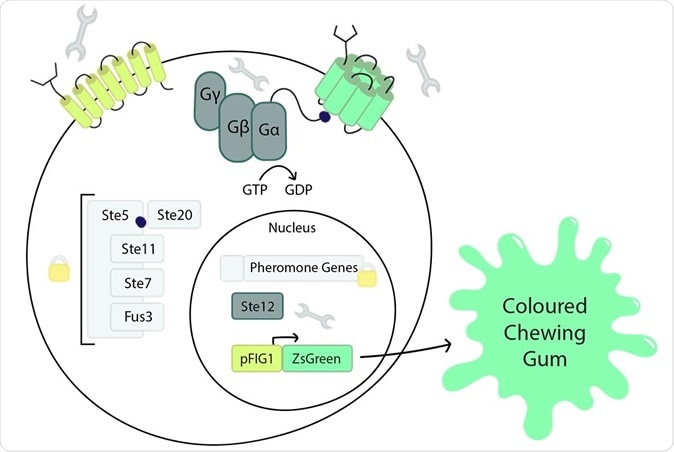 When LH or estrogen levels increase, the biosensor is activated, resulting in the synthesis of a compound that causes the color of the gum to change in correlation with the hormone levels. In order to increase the simplicity of use of this tool, an app will also be designed to allow the woman using the gum to know at what stage of ovulation she is at. This is by an app-mediated analysis of the photo of the used gum uploaded by the user, based on the color developed. The results for each day will be saved to provide a visual prediction of the timing of the fertile window in each user. The researchers also look forward to the day when such data, stripped of all identifying details, can be made available with the women’s consent to provide more data for research in this and related areas of health.

The biosensor makes use of a yeast organism that is genetically engineered with the sequences needed to express estrogen and LH receptors and the attached color-producing ligands. These sequences are cloned into the bacterium Escherichia coli using USER technology, where they are amplified and then assembled into a single plasmid. This plasmid is inserted into the yeast cell Saccharomyces cerevisieae genome where it produces the receptors. The sequences used here are derived from previous work at the same institution, the only requirements being their characterization and further improvement.

The researchers are now working on ensuring the yeast survives in the gum, following which they plan to add flavors to the gum. They hope this “smart chewing gum” will help women to track their fertility non-invasively, precisely and productively.

The group of researchers is moving through the various stages of development, including marketing, legal, production, financial and educational awareness-building needs.  They have selected this specific yeast to minimize European marketing issues due to public concern over the use of genetically modified organisms, and various other safety measures such as a “kill switch” have also been implemented. They claim hundreds of women have expressed enthusiasm for the project already, despite the GMO. Moreover it is biodegradable, which is a big advantage.

The international team of students, from Denmark of course, but also from India, Nepal, Hungary and Germany, have been motivated by the current expense and difficulty of traditional fertility monitoring methods. They want to make the gum simple, cheap and accurate, available in many flavors through the local supermarket, and packaged in an appealing but not flashy pack. They feel that it could be a real boon to gynecology clinics in poor and rural areas where resources for fertility testing are non-existent.