A rainforest reserve, bordering the mighty Atlantic, in the Sao Paulo state of Brazil, is now in the news because scientists saw a flash of blue while they were gathering mushrooms. Indeed, this privately-owned Reserva Betary park can boast the honor of being host to the newly discovered species of fungus gnat, named Neoceroplatus betaryiensis, the larva of which is the first bioluminescent creature found in the Neotropics that emits blue light. 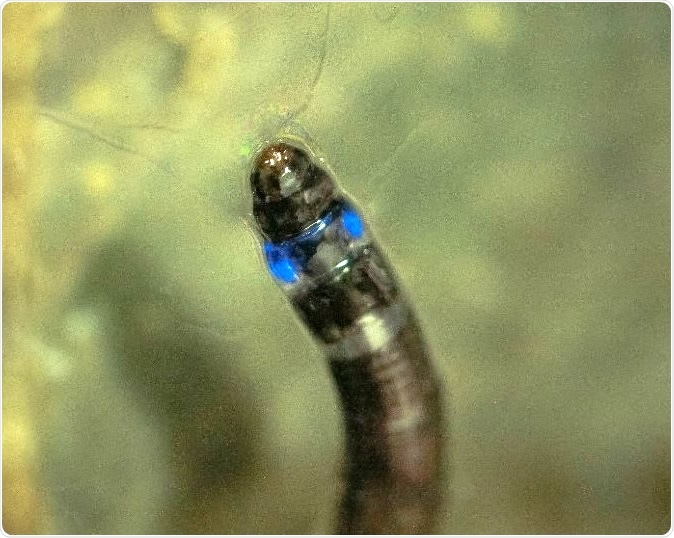 The discovery, which is reported in the journal Scientific Reports, is important because of the way the new species emits light. This could lead to new applications of bioluminescence in the fields of analysis and biotechnology. For instance, bioluminescent markers could show up specific cells or genes that are of interest in pollution biosensors or biological research.

There are many other shining insects and fungi in this zone but all of them emit green, yellow or red light. Species of fungus gnat that shine blue have previously been found only in North America, New Zealand and Asia. This underlines how little the rich biodiversity of the South American rainforest has been explored even at this late date.

The little fungus gnat larva which is holding center stage at the moment was found incidentally, as part of an effort to collect bioluminescent mushrooms, of which many species have been found in this reserve. The blue light attracted the attention of the fungi gatherers because of its rarity – fungi and fireflies do not emit blue light. The light is produced in three spots – the last abdominal segment and two places on the first thoracic segment – and is turned off when the larva is touched. The light peak is at a wavelength of 472 nm. Many such species use the bioluminescence to attract their prey, which are caught in their webs.

The new species is part of the fungus gnats (Keroplatidae), and like all bioluminescent species, it produces light through a reaction between a substance called luciferin and an enzyme called luciferase, which acts on the former.

The luciferins and luciferases vary markedly between different species, even when found in the same ecological niche. Thus N. betaryiensis has a different mechanism of bioluminescence from others within the same family.

In most cases, bioluminescence is studied after separating an extract of the insect into two parts. One of these parts is stored on ice to keep its luciferin and other enzyme content stable (cold extract). The other part is heated, which destroys all the enzymes to leave luciferin behind (hot extract).

In the present study, the researchers looked at the similarity in a single gene called the mitochondrian cytochrome oxidase I (COI), to find how this new species related to other already discovered bioluminescent insects.

The researchers also examined whether the luciferin and luciferase from the new species was similar to that from another blue light emitting species called Orfelia fultoni, an insect found in the US-Canada Appalachian mountain range.

They found that combining cold extracts from O. fultoni and hot extract from N. betaryiensis, and vice versa, worked as well as when both were from the same species. Researcher Vadim Viviani says, “We also show that larvae of this fungus gnat contain a luciferin-storing protein known as SBF, which is short for substrate-binding fraction, as does O. fultoni. Therefore, both species have the same biochemical system.”

Viviani had already purified and characterized extracts of these chemicals from O. fultoni in 2000, which made things easier. Viviani’s research group has also previously discovered another new species of the genus Neoditomyia from another Sao Paulo rainforest park called Intervales. This species has both luciferin and SBF but is non-bioluminescent – until its luciferin is combined with luciferase from either O. fultoni or N. betaryiensis.

Based on their genetic makeup as well as their similar biochemistry, all these three species appear to be closely related. The next step is to isolate and characterize the luciferin and luciferase produced by N. betaryiensis, though this is much rarer and more difficult to find. After this, the chemicals will be cloned and their structure investigated in two different laboratories. They expect to use sophisticated imaging techniques like nuclear magnetic resonance imaging to find out how the molecules are constructed, having already found its molecular formula.

Coffee plants have a small but consistent core microbiome of fungi...