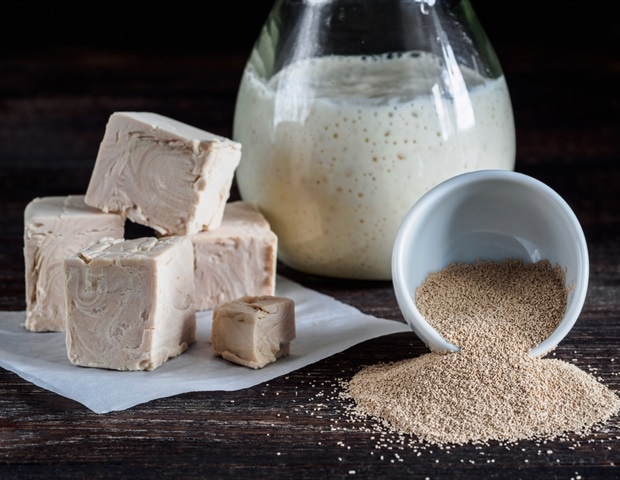 Scientists prove that ergothioneine, an important compound that may be used to delay the onset of diseases such as Alzheimer’s and dementia, can be produced in baker’s yeast.

Ergothioneine is a natural amino acid with antioxidative properties. It prevents cellular stress, which can lead to brain diseases, neurological damage and cancer. In rats and roundworms, research shows that ergothioneine has promising effects in preventing neurodegenerative diseases such as dementia and Alzheimer’s. Also, it has been reported that patients suffering from neurodegenerative diseases have significantly lower blood levels of ergothioneine than others. These findings suggest that ergothioneine might have great potential as a vitamin to prevent or delay the onset of those diseases.

Currently, it is both complicated and expensive to produce ergothioneine with chemical synthesis. However, by engineering and optimizing baker’s yeast, scientists from The Novo Nordisk Foundation Center for Biosustainability (DTU Biosustain) has for the first time exploited the potential of making ergothioneine in yeast in a bio-based fashion.

In a study published in Frontiers in Bioengineering and Biotechnology Journal, the researchers were able to produce 0.6 gram of ergothioneine pr. liter yeast broth in a small-scale fermentation process.

Too expensive for consumers

Because of today’s expensive chemical production routes, current market prices of ergothioneine are very high compared to vitamins such as vitamin C and vitamin D that also prevent certain diseases. Thus, one of the main goals for the scientists is to further optimize the production of ergothioneine to reach a higher yield, so it can be sold to the consumer at a much cheaper price in the future.

One of the main reasons for ergothioneine being so expensive at the moment is that the chemical process is costly and the yields fairly low. Furthermore, it has not been tested for its efficacy for the prevention or treatment of neurodegenerative diseases in humans yet. But since the safety assessment of ergothioneine has already been done, it is ‘simply’ a question of being able to produce enough.

Before the scientists were able to produce ergothioneine in a biobased fashion, some explored the possibility of simply extracting ergothioneine from mushrooms. But again, this would be extremely expensive and require mushroom farms taking up areas of potential farming land.

By making this important antioxidant in a biobased fashion, you avoid using chemicals or farmland. Yeast is far better at producing ergothioneine than humans or mushrooms could ever be.”

Enzymes are the key

In the study, the scientists chose to screen enzymes from different fungi and from the bacterium Mycobacterium smegmatis in various combinations to identify the clones with the highest ergothioneine production. As production host they used yeast, and they discovered that two specific enzymes NcEgt1 and CpEgt2, both fungal enzymes, made the best combination.

Furthermore, they also investigated potential ergothioneine transporters to increase the yield from their yeast strain. Unfortunately, this did not have any effect.

One thing that worked was to add amino acids that operate as building blocks of ergothioneine to the medium. By doing this, they were able to increase the production of ergothioneine significantly.

Thus, optimization of the medium was one of the important steps to increase the production to 0.6 g/L in 84 hours, which compares well with the current best-reported production in E. coli that gets 1.3 g/L in 216 hours.

“The bacterial pathway in E. coli uses a lot of energy while the fungal pathway in yeast doesn’t. That could lead to a production benefit. Also, yeast is a safe and well-known production host for food supplements” says Steven van der Hoek.

Currently, the scientists are trying to increase productivity by engineering the strain further to make a commercially viable product.

The authors of this study also stress that the positive effects of ergothioneine have so far only been reported in animal models, and, hence, it is too soon to say if this will work in humans. Regardless, ergothioneine production in a larger scale than today could be important to get access to a beneficial dietary supplement.

More taxpayers’ money for the environment and public benefit