Biomedical scientists are working hard to create more pain-free methods of disease detection and treatment. A simple blood test is highly informative but arouses intense anxiety in many people. Now a new paper published in the journal Nature Biotechnology on November 25, 2019, reports on a new wearable sensor that can be successfully adapted to mass production, is flexible, and can be used to produce readouts of metabolites and nutrients in the blood based on a sweat analysis. 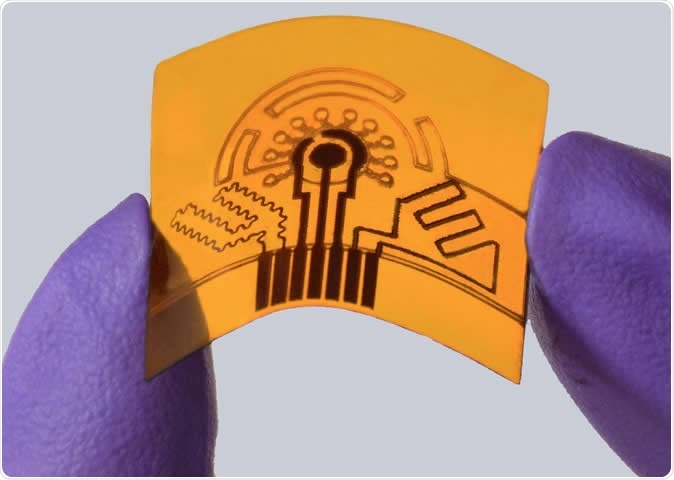 Prior research has led to the development of many sweat sensors for the detection and measurement of substances present at high concentrations in blood, such as salts, glucose and lactate. Not only are these sensors not able to detect low analyte concentrations, but they also cannot detect multiple analytes simultaneously and their fabrication is typically restricted at large scales.

The current sensor is more sensitive, being able to detect minute levels of selected compounds. Even more important, it can be produced on a large scale with greater ease, increasing its cost-effectiveness.

Such sensors are important because they allow continuous monitoring of patients with chronic diseases that are not immediately dangerous but could potentially lead to life-threatening complications. Some examples are cardiovascular disease, diabetes and kidney disease. In all such conditions, the blood levels of certain nutrients or metabolites change, and being aware of such changes could perhaps help doctors to treat their patients better without having to do repeated blood draws.

The researchers say that sweat sensors could be of great use in detecting molecular changes in blood that reflect altered health. This is done in a quick, painless and ongoing manner, allowing each patient to be observed in a case-relevant manner, speeding up diagnosis and ensuring early intervention.

The current study focuses on microfluidics sensor devices. Microfluidics use very minute amounts of liquid that flow through extremely fine channels, narrower than 0.25 mm. These sensors thus use very tiny quantities of sweat, reducing chances of evaporation or contamination and thus promoting accuracy of the results. The device actually acquires measurements of the fresh sweat as it is supplied to and flows through these microchannels and shows how these values change over time.

Microfluidic wearable sensors have mostly been produced using a channel etching technology called lithography-evaporation process. This is both complex and capital-intensive.

However, the current research used laser engraving on graphene to manufacture the sensors. Graphene is a 2D sheet of carbon arranged in the same manner as graphite. Carbon dioxide laser etching on a plastic plate is used to create the sensors as well as the microfluidics channels. This is an extremely common laser that can be used even by DIY crafters at home.

The researchers chose four parameters to be measured by their sensor – blood levels of tyrosine and uric acid, the heart rate and the respiratory rate. Tyrosine is a marker of certain metabolic diseases, liver disease, eating disorders and disorders of the mind and brain.

High uric acid levels are seen in gout, a painful inflammation of the joints that occurs due to the formation of uric acid crystals. Most commonly found in the joints of the feet, gout can be a disabling condition and is becoming more of a problem worldwide.
The researchers tested the sensors on healthy people as well as in patients. For tyrosine testing, they used two groups: athletes and people of average fitness. Tyrosine levels are affected by fitness levels. The sensors showed, as expected, lower levels in the athletes. Uric acid levels were tested in fasting healthy individuals, and then repeated after they consumed a meal with plenty of purine-rich compounds. Purines are food molecules that give rise to uric acid when they are metabolized. Uric acid levels rose after the meal. When tested in gout patients, the sensor showed uric acid levels that were way higher than in healthy people.

For a more solid proof of accuracy, the researchers also carried out blood tests on these patients as well as healthy controls. They found that the measurements agreed closely, whichever method they used.

The scientists hope that making such sensitive devices at a low cost will boost their eventual use at home by patients who need to keep watch on health conditions such as gout, diabetes, and cardiovascular diseases. Patients who know exactly how they stand with respect to their health conditions at present could even adjust their medications or their diet as needed to bring about health improvement.

Researcher Wei Gao says, “Considering that abnormal circulating nutrients and metabolites are related to a number of health conditions, the information collected from such wearable sensors will be invaluable for both research and medical treatment.”