Scientists from University Hospital Zurich, ETH Zurich, Wyss Zurich and the University of Zurich have managed to keep human livers alive for a week outside the body using machines. If successful on large scale trials, this could be a breakthrough for organ transplants and donor organs could be stored outside the body for longer, speculate researchers. The new study was published today in the latest issue of the journal Nature Biotechnology. The study was titled, “An integrated perfusion machine preserves injured human livers for one week.” 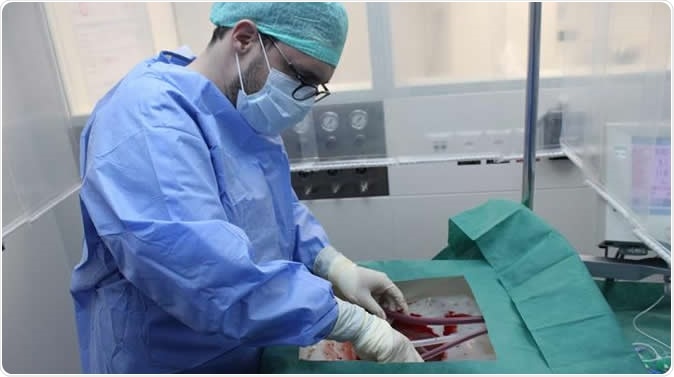 A surgeon connects the donor liver to the perfusion machine. Image Credit: USZ

They collectively made a machine that can help repair the injured and damaged livers and also keeps the liver tissues alive outside the body. At present livers from donors could be preserved once removed from the body for only a few hours. The team wrote, “Current approaches for normothermic perfusion can preserve human livers for only 24 h.” This means that recipients of the transplants would have only a precious time window before they could receive the liver. With the help of this new perfusion machine, not only healthy donated livers, but also injured and damaged livers could be stored outside the body. Experts in transplantation medicine have hailed this new study. Persons with severe liver disease and liver cancers would benefit greatly from this research the team of scientists add.

In addition the machine that perfuses the organs outside the body could be used to bring to life injured livers from cadavers after perfusing them for several days. Researchers have added that the machine mimics the physiological perfusion system of the body. They write that they developed the machine that, “integrates multiple core physiological functions, including automated management of glucose levels and oxygenation, waste-product removal and hematocrit control.” The machine was developed with a series of pig livers. The team moved on to human livers after successful survival of the pig livers outside the body with the help of the machine.

Prof. Pierre-Alain Clavien, Chairman of the Department of Surgery and Transplantation at the University Hospital Zurich and leader of this project said that this project began in 2015 when donated livers or injured livers could be preserved for only 12 hours using this machine. He said, “The success of this unique perfusion system – developed over a four-year period by a group of surgeons, biologists and engineers – paves the way for many new applications in transplantation and cancer medicine helping patients with no liver grafts available.” Now the donated as well as damaged livers could be preserved for a seven day period. This can help repair them of injuries as well as clean up fatty deposits before transplanting them into recipients. Liver as an organ is capable of regeneration. This means that if part of the organ is removed, the rest grows to fulfil its functions. This new machine could also help regeneration of the injured and resected livers, explain the researchers.

Wyss Zurich institute led a project called the Liver4Life project. Under this project researchers from University Hospital Zurich, ETH Zurich and the University of Zurich came under a single roof to bring about this machine. Prof. Philipp Rudolf von Rohr, Professor of Process Engineering at ETH Zurich and co-leader of the project said, “The biggest challenge in the initial phase of our project was to find a common language that would allow communication between the clinicians and engineers.”

For this study the team came together and used ten poor quality human donated livers. These livers had been refused by all centres across Europe because of their poor functional qualities. The team put all the ten livers onto the perfusion machine. They noted that six of the livers, by the end of the week were fully functional and ready for transplant onto recipients. The team found that these livers could now produce bile and coagulation factors (that is normally produced by the liver). These livers now maintained cell energy or ATP and also showed an intact structure and anatomy of the liver. As a next step the team plans on transplanting these six livers onto various recipients and see if they are actually functional after transplantation. As of now the success of the machine made by surgeons, biologists and engineers in collaboration is commendable and would allow many on the waiting line for donated livers to benefit, say researchers. The team writes in conclusion, “With further testing to demonstrate its use with injured livers and long-term transplantation success, this machine may provide an avenue for providing more patients with liver grafts.”

Viewpoint: Biotechnology could save our favorite banana. Will anti-GMO activists stand...