A new study published in the journal PLOS Pathogens in January 2020 reports the development of mosquitoes that have been genetically modified to resist infection by several types of the dengue virus. This is the first time ever that all types of the virus have been targeted by the engineering of the mosquito DNA. Covering all virus types is essential to achieve proper disease control.

Dengue is a viral disease spread by mosquitoes that is becoming a global problem due to its numerous complications and the fatality rate. It is chiefly transmitted by Aedes aegypti mosquitoes. According to World Health Organization (WHO) statistics, millions of people in subtropical and tropical climate zones fall victim to this often deadly viral infection, which readily attacks those with weakened immunity. Especially poignant is the number of severe illnesses and deaths due to dengue in children in Asia and Latin America. 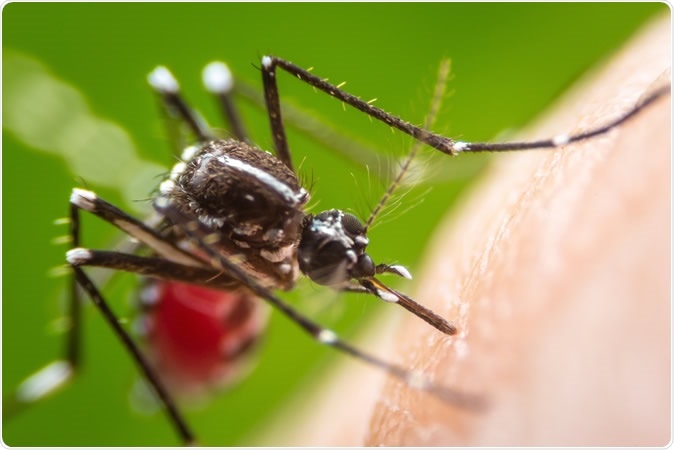 Just a short while ago, the highest ever prevalence of dengue in the American continents was reported by the Pan American Health Organization (PAHO). Beginning with high fever and headache, the illness progresses with other flu-like symptoms including rashes. If not controlled in time by the natural immune response, it may cause critical bleeds within the body’s various organs by lowering the platelet count through different mechanisms. Since there is no way to eradicate the virus, prevention requires virus control measures.

Genetic engineering has made it possible today to generate mosquitoes that cannot play the role of a host to the virus – this is called reducing the vector competence. This modification makes it difficult for mosquitoes to pick up the virus and to transmit it to other hosts.

The study describes the result of changing around certain genes in the Aedes aegypti mosquito in order to render them resistant to many types of the dengue virus. These engineered mosquitoes have a gene that codes for a single-chain bit of a human monoclonal antibody that has a broadly neutralizing effect against the dengue virus. Such an antibody is able to bind all types of dengue virus and not just a particular subtype.

This fragment, called the single-chain variable fragment (scFv) codes for the antibody region which determines which antigen it will bind. The new antibody prevents the infection with or transmission of any of the four dengue virus types in a mosquito that expresses it. This means they can no longer spread the virus to humans. This is the first time an engineered mosquito has been developed to resist all dengue strains.

After identifying the antibody, they inserted it as a payload into the female Aedes mosquitoes. When this engineered mosquito takes in a blood meal, the antigens activate the antibody which is then expressed in the mosquito cells. This is how the mosquito’s immune reaction against the virus is set off. This prevents viral replication and keeps the virus from being able to spread throughout mosquito tissues. By this means, humans can no longer be infected by the virus through a bite from this mosquito.

The study thus presents a highly attractive route by which dengue virus control can be achieved with great effectiveness, using a gene-based technique. This may be useful to deactivate the transmission of other viruses related to this organism. The authors also suggest that if this gene strategy is coupled with a gene-drive system, which uses gene editing technologies like CRISPR-Cas9 to insert the desired gene into other mosquitoes, it could enable a dissemination mechanism whereby wild-type mosquitoes, or the type found in nature, can be quickly infected with the modified gene, to completely prevent the dengue virus from being transmitted by mosquitoes.

The best part of this finding is, according to the researchers, the fact that the newly developed mosquito strain cannot act as host to any of the four known types of dengue viruses, allowing it to be a genetic tool to control the spread of dengue through mosquitoes in nature.

Commenting on the work, researcher James Crowe says, “It is fascinating that we now can transfer genes from the human immune system to confer immunity to mosquitoes. This work opens up a whole new field of biotechnology possibilities to interrupt mosquito-borne diseases of man.” Co-researcher Omar S. Akbari says that in the not-so-distant future dengue could be controlled by field-based methods, reducing the toll of this infection on human health and life. His laboratory has been involved in validating and testing different techniques to prevent mosquito-mediated dengue transmission as well as the spread of many other viruses like the Zika, yellow fever and Chikungunya viruses all at the same time.

Mosquitoes are involved in the spread of multiple serious and even killer diseases including the above illnesses and of malaria. In this way the existence of infectious mosquitoes puts the health of 6.5 billion people around the world at risk. With such a bad reputation, there is little wonder that most research to date has concentrated on eliminating the mosquito vector rather than disarming it. Says global director of the Tata Institute for Genetics and Society (TIGS), Suresh Subramani, “Work from the Akbari lab and at TIGS is aimed at disarming the mosquito instead by preventing it from transmitting diseases, without killing the messenger. This paper shows that it is possible to immunize mosquitoes and prevent their ability to transmit dengue virus, and potentially other mosquito-borne pathogens.”

Nanoparticles in Biotechnology and Pharmaceuticals Market Increasing Demand with Leading Player, Comprehensive Analysis and Forecast 2026 – Science In Me

Using sponges to wipe out cancer

First demonstration of a 1 petabit per second network node