Another year has passed and we are now well into 2020. But 2019 was an interesting year for biotechs listed on Euronext, so let’s take a look at how it went. Euronext’s biannual Biotech Barometer, published recently, provides us with an interesting snapshot of the biotech market in the second half of 2019. 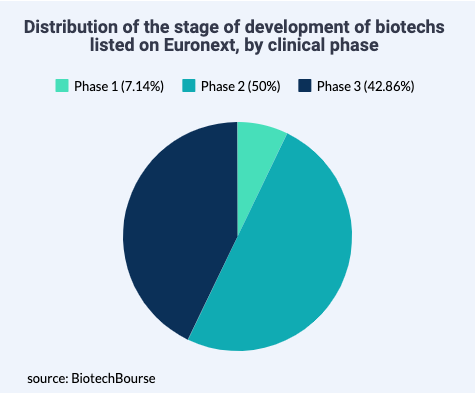 The Biotech Barometer H2 2019 introduces the trends and figures of the 52 biotechs listed on Euronext markets in Paris, Brussels, Amsterdam, and Dublin. With an overall market capitalization of €24.4B, these biotechs focus on diagnostics and therapeutics.

“Biotechs listed on our markets show a mature pipeline, which is one of the main encouraging signals we observe,” says Nicolas Meunier, Head of Advisory and Investor Relations Solutions at Euronext. “In line with this maturity, the sector is increasingly considered as a valuable investment opportunity.”

While the stock performance on Euronext in the first half of 2019 was stable, it dropped by 10.7% in the second half. Overall, its performance was down by 4.0% in 2019. The main reason for the drop in H2 2019 was a low performance (-8.2%) in the fourth quarter, due to impactful announcements from a number of biotechs on the European biotech market. 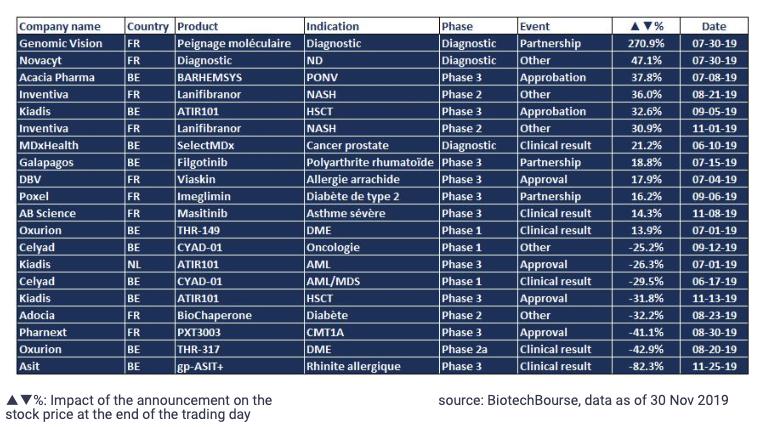 Declarations by ASIT Biotech, Pharnext, and Kiadis among others, had a significant effect on the performance in Q4 2019. For example, in November 2019, Dutch company Kiadis Pharma revealed that it no longer expected EU conditional marketing authorization for its lead candidate ATIR101. The announcement greatly impacted its stock performance at the end of the trading day, hitting a low at -31.8%.

In early October 2019, French biotech Pharnext announced that the FDA had recommended an additional phase III study for the evaluation of its lead candidate PXT3003 in Charcot-Marie-Tooth Disease Type 1A. Here too, the statement was followed by a drop in Pharnext’s stock of 41.1%.

ASIT Biotech disclosed in November 2019 that its phase III trial with gp-ASIT+TM for grass pollen allergy failed to meet its primary endpoint. This announcement was followed by the most severe hit at the end of the trading day with its stock performance plunging -82.3%.

Larger biotechs preferred by investors, while small biotechs fall behind

The numbers of H2 2019 show that investors greatly favored larger market capitalization to the detriment of smaller companies. The top 10 biotech companies valued at over €200M experienced an increase in their valuation by +€7.55B. The value of the remaining 42 companies, on the other hand, decreased by €480M (-15.7%).

In total, the market capitalization of all 52 biotechs listed on Euronext grew by €7.4B in the second half of 2019. Key drivers were the two Belgian biotech giants Galapagos and Argenyx. Galapagos gained +€5.95B, while Argenyx increased its value by +€1.4B.

“Larger biotechs are benefitting from a renewed interest in the sector,” says Meunier. “They provide great momentum and better liquidity conditions for investors.” 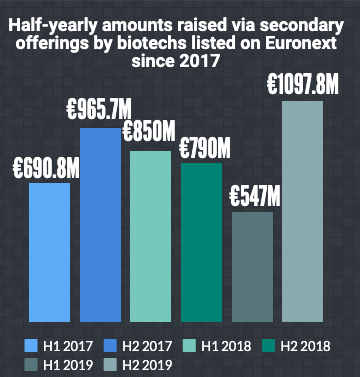 For the first time in several years, there were no biotech IPOs in continental Europe in 2019. But although market conditions remained rocky in the second half of 2019, biotechs listed on Euronext raised €1.1B. This is quite a success compared to H1 2019, where biotechs raised €547M and H2 2018, in which they raised €790M.

“At the end of the year, especially during the fourth quarter, we have seen very active market conditions for follow-on transactions, which is a good sign for the year to come,” says Meunier. “If biotechs deliver their expected clinical news flows well, then we can expect a renewed fundamental interest in the sector.”

If you want to know more about the European biotech market, check out Euronext’s Biotech Barometer 2019!

Header Image via Shutterstock.com. All other images via the Euronext Biotech Barometer 2019.

Pfizer to Develop Akcea/Ionis Antisense Candidate for Up to $1.5B