Dr. Jessamy Tiffen, a senior member of the Centenary Institute’s Melanoma Immunology and Oncology Program has some sage advice for aspiring female scientists in advance of this year’s ‘International Day of Women and Girls in Science’. 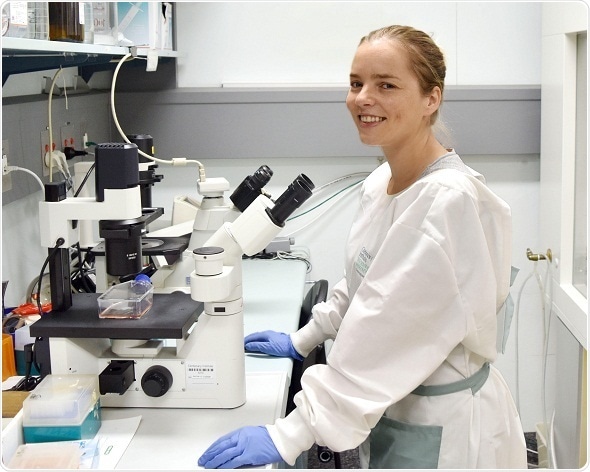 A career in science can be exciting and fulfilling and gives you the potential to make a real impact in the world. There will be barriers to overcome but if you have a curiosity about the world we live in and are prepared to work hard, you might just be amazed where your scientific career can take you.”

‘International Day of Women and Girls in Science’ held on the 11th February each year is part of a United Nations General Assembly resolution officially recognizing the critical role that women and girls play in science and technology. The UN hopes to see full and equal access and participation in science, for women and girls across the globe.

As a scientist at the Centenary Institute, Jessamy is focused on trying to better understand melanoma, a devastating disease responsible for more than 1,700 deaths each year in Australia. Jessamy seeks to understand why certain melanomas respond to treatment in some individuals while other melanomas do not.

“Melanoma is the most common form of cancer affecting young Australians which is extremely sad but which is also extremely motivating,” she says. “Understanding the mechanics behind melanoma treatment resistance is essential to developing new drugs and finding new cures which will help save lives.”

Jessamy credits some of her early interest in science from her grandfather who was a microbiologist. “We used to talk about his work around the kitchen table and discuss his latest findings (on footrot!) so the importance and need for research and scientists was communicated to me at an extremely early age. His love of science certainly rubbed off on me,” she says.

It was at school however where Jessamy really became captivated by science and much of this was due to the teachers that she was fortunate enough to encounter.

I had a series of fantastic female science teachers who were extremely passionate about their work and who were absolutely committed to their students. They were all so positive and allowed my curiosity to flourish. They also helped me to believe in myself – to realize that I was good enough to take my science to a higher level and that there would be career opportunities out there for me. Looking back, I realize how essential it was, having such supportive female teachers encouraging me at such a formative stage of my life.”

Jessamy notes that there are still challenges to overcome in the higher learning sector, as well as in the workplace, and that gender disparity still remains an issue in the Australian scientific community. Statistics for example show that women comprise more than half of science Ph.D. graduates and early career researchers, but less than a fifth of senior academics in Australian universities and research institutes.

“Unfortunately factors such as stereotyping of women, a lack of flexibility in working arrangements for mothers and a lack of female role models still persists in our industry,” she says. “Many women I talk with have experienced barriers or a lack of fairness at some point in their scientific career.”

Jessamy however, believes that this situation is improving. “Organizations are slowly getting better at implementing inclusion and gender equity policies, even compared to a decade ago.”

“I’ve benefited greatly in my current role,” she explains. “The Centenary Institute has policies in place allowing part-time work and flexible hours for mothers. I also have access to a research assistant and was awarded a Carers Travel Award that allowed me to attend a major scientific conference with my baby. It’s this type of support that should be available in all organizations.”

Working closely with a female mentor has also proved valuable for Jessamy – in supporting her career aspirations as well as in providing perspective on achieving a work-life balance.

“The Centenary Institute is an academic partner of Franklin Women, an organization supporting women working in health and medical research careers,” she says.

“I was fortunate enough to undertake their mentoring program which linked me up with a brilliant female mentor outside of my workplace and this has been fantastic. I meet with her on a regular basis and we talk about my goals, how I’m doing at work and any issues or problems that I might be encountering generally. My mentor acts as an objective sounding board for me, she provides advice and has become a friend and advocate for me.”

Final words of advice from Jessamy to any aspiring female scientist out there?

We need to encourage a new generation of female scientists to help tackle the major challenges of our time, to break-down barriers and to make it to the top.”

“If you have an interest in science think about embracing it. There are are so many career opportunities out there for skilled and motivated scientists in areas ranging from aerospace, to biotechnology, telecommunications, agriculture and the environment. Believe in yourself and don’t be afraid to get out of your comfort zone. Just go for it and realize that overcoming the challenges makes it all worthwhile.”

The delicate water lily: A rose by another name?