There is no escape from the meltdown in share prices – irrespective of where money is invested.

For example, although investment trust International Biotechnology has a portfolio comprising companies involved in the fight against major illnesses and diseases, including coronavirus, its share price has been pushed down sharply – by nearly 28 per cent over the past month.

Manager Doctor Carl Harald Janson, an employee of SV Health Managers, has attempted to de-risk the portfolio a little by selling a couple of (undisclosed) stakes and holding some of the trust’s assets in cash. 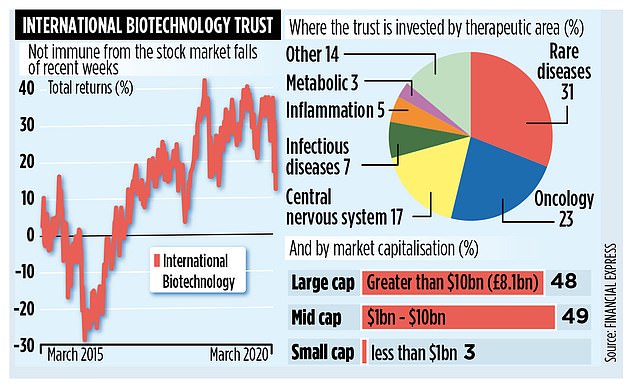 The portfolio currently has 78 stakes in healthcare companies, but shares are falling anyway

The trust also has no expensive borrowing to fund, but he accepts that for the time being at least, the trust’s share price will be at the mercy of the stock market. Some 86 per cent of the portfolio is listed in the United States.

He says: ‘The key at the moment is to defend our elderly – our grandfathers and grandmothers – from coronavirus, even if that means going into lockdown and impacting adversely on everyone’s social and economic lives. We need to stop this pandemic so we can move forward.’

Janson’s view is framed by his medical training: he qualified as a doctor in the early 1980s before deciding 14 years ago to use his knowledge to invest in the healthcare industry. ‘Hopefully, we can get a vaccine developed,’ he says, ‘but that is a long way into the future. Shorter term, a drug is our best hope.’

He is keeping his fingers crossed that US-listed Gilead, a key trust holding, may have an answer with its antiviral drug remdesivir.

Although he holds the company’s shares primarily because of its leading role in coming up with medications to combat HIV, he says remdesivir could have a role to play in the fight against coronavirus. 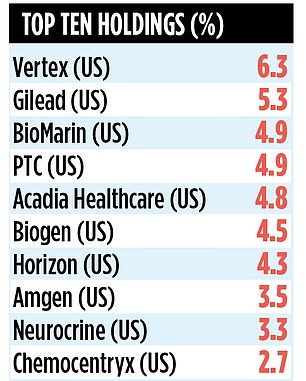 Janson says: ‘There are pre-clinical trials going on around the world and we could know the results as early as next month. Even if effective, it wouldn’t then be available until the summer – and for it to be effective it needs to be taken early in the contraction of the disease.’

At some stage, Janson will use some of the trust’s cash pile to drip money back into the market, but he says now is too early.

Long term, he believes the trust’s focus on healthcare will serve it well – especially as populations age and drugs are developed to thwart growing illnesses such as diabetes and dementia.

Figures from the United Nations indicate that the world’s population of the over-65s will double between now and 2050.

The portfolio currently has 78 stakes in healthcare companies.

All the top ten holdings in the £184million trust are listed in the United States. They include Vertex Pharmaceuticals that discovered the first medicines to treat the underlying causes of cystic fibrosis and Biogen, a leader in coming up with therapies for neurological diseases.

It also has a holding in a venture capital fund managed by SV. This gives it exposure to a portfolio of unquoted companies.

In its last financial year, the trust paid an annual dividend of 28p a share, equivalent to a dividend yield of 2.6 per cent.

The total annual charge is 1.3 per cent. Over the past five years, the trust has generated a return for shareholders of just under 9 per cent. Over the same period, the FTSE All-Share Index has recorded a loss of 10 per cent. The shares closed on Friday at £4.98 – a big discount to the value of the trust’s underlying assets.

Why Vir Biotechnology Stock Is Skyrocketing Today – The Motley Fool