Major nations are in a race to make an effective vaccine that could help treat the novel coronavirus infection COVID-19. As hundreds of thousands are infected across the world and over sixteen thousand killed, the pandemic shows no signs of relenting.

Last week in Seattle, a few dozen volunteers took part in the first trial for a vaccine against COVID-19. This is a phase 1 safety trial to ensure that the vaccine is safe for use in humans. At a later stage, it would be tried on humans to see if it is effective as well as safe. The United States government is funding the current trial.

Hanneke Schuitemaker, head of viral vaccine discovery and translational medicine at Janssen Pharmaceuticals, is one of the researchers working on the development of the vaccine. He said that people who are infected with the novel coronavirus develop specific antibodies against the virus. These antibodies could help protect the individual against the infection in the future, he said. However, this long term protection is still speculated, he said.

One of the significant problems associated with this virus is its capacity for mutation, he explained. He said that the development of a vaccine is facing a challenge because of its ability to change. Further, its mutations and change cannot be predicted yet, he said.

Schuitemaker explained that a single viral genome is being used now to create the vaccine at present. This means that it may be some time before the efficacy of the vaccine has been proven. He said that it may be around a year to year and a half for the development of the vaccine. Further vaccines may be necessary to be able to fight off the COVID-19 strains over the coming years, he said. These vaccines may be created to help the body create antibodies that can kill the incoming virus. The clinical trials, though, he explained, would take time. As of now, the safety trials would be given to people who are healthy and have not encountered the virus, he said. 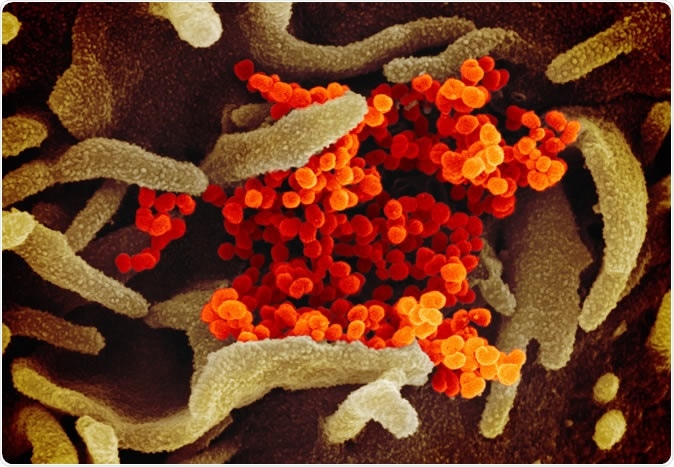 Novel Coronavirus SARS-CoV-2 This scanning electron microscope image shows SARS-CoV-2 (orange)—also known as 2019-nCoV, the virus that causes COVID-19—isolated from a patient in the U.S., emerging from the surface of cells (green) cultured in the lab. Credit: NIAID-RML

In another trial, Jennifer Haller, a 43-year-old from Seattle, became the first healthy volunteer in whom the vaccine was administered. The vaccine is called mRNA-1273. As of now, she has experienced no side effects. This new vaccine was developed by the National Institutes of Health and the Massachusetts-based biotechnology firm Moderna Inc.

The chief medical officer for Moderna, Dr. Tal Zaks, said in a statement, “We’ve been able to do that based on the fact that our technology starts with the digital information. So we did not need to have the physical virus, just the information.” He said that this new vaccine is a part of a synthetic RNA molecule that is the viral genome. This vaccine can stimulate the immune system of the recipient, he said.

Moderna’s vaccine is to be administered in a schedule of two-doses, 28 days apart. It began on the 16th of March with Haller at the Kaiser Permanente Washington Health Research Institute in Seattle, Washington. She and other participants would be monitored after the vaccination for 14 months. Participants would receive $100 for each lab visit for a total of $1100. There would be 45 healthy participants including males and non-pregnant females aged between 18 and 55 years. Zaks feels that this would work. He said, “we’ve already begun the scale-up activity in our manufacturing site to be able to scale up and produce the vaccine.”

The WHO has said that the vaccine against the coronavirus would be for all. Officials at the health organization said that there had been remarkable progress in the development of the first vaccines.

Dr. Maria Van Kerkhove, the technical lead for WHO’s emergencies program, spoke at a press conference on the 20th of March at Geneva saying, “The acceleration of this process is really truly dramatic in terms of what we’re able to do, building on work that started with SARS, that started with MERS and now is being used for COVID-19.” Officials warned that they are still a long way off from having it ready for the general public.

Dr. Mike Ryan, executive director of WHO’s emergency program, also said that clinical trials could take time and worse than no vaccine was a “bad vaccine.” Ryan said, “We have to be very, very, very careful in developing any product that we’re going to inject into potentially most of the world’s population.” He added, “Even if we get a vaccine that’s effective, we have to have that vaccine that’s available for everybody. There has to be fair and equitable access to that vaccine for everybody. How do we ensure we get enough of that vaccine in time, how do we ensure, how do we ensure we can distribute that vaccine to populations all over the world and how do we convince people to take the vaccine.”

WHO Director-General Tedros Adhanom Ghebreyesus said, “This vaccine should not be for the haves, it should be for those who cannot afford it too. We need to answer that question as early as possible.”

Others in the race

Both Europe and China are also working on the vaccine. In China, over one thousand scientists from the Academy of Military Medical Sciences are working on a vaccine against the virus. Wang Junzhi, a biological products quality control expert with the Chinese Academy of Sciences, said today at a conference that his country “will not be slower than other countries.” In Europe, a consortium is working to make a vaccine against the virus. Researchers from VirPath university laboratory in Lyon, France, are progressing at great speed.

Fake vaccine against COVID-19 in the news

United States federal prosecutors have issued a restraining order against a website that is claiming to offer a vaccine against the novel coronavirus. The Justice Department said that this a fraud scheme that is looking to seek “profit from the confusion and widespread fear” of the pandemic. The Justice Department’s statement said, “In fact, there are currently no legitimate COVID-19 vaccines, and the WHO is not distributing any such vaccine.”

Assistant attorney general Jody Hunt said, “The Department of Justice will not tolerate criminal exploitation of this national emergency for personal gain. We will use every resource at the government’s disposal to act quickly to shut down these most despicable of scammers, whether they are defrauding consumers, committing identity theft, or delivering malware.”

Annual increase in whole-atmosphere mean methane concentration for 2021 marks the...

Rena Bizios elected to American Academy of Arts and Sciences