Sometimes a small change has a significant outcome. A single point mutation in human hemoglobin can cause anemia. An extra copy of a single chromosome causes Down syndrome. In general, genes need to be in tight coordination to produce proteins and carry out functions optimally. This is a very harsh reality in crop genetics, where it’s difficult to translate simple genetic modifications into improved crop yields or better growth characteristics. However, a recent study published in Nature Plants by a research team from the Chinese Academy of Sciences in Shanghai described just that: an alteration on how one gene is expressed led to plants that grew faster and handled high temperatures better.

One of the landmark events in the Earth’s history was the appearance of oxygenic photosynthesis. About 1.5 billion years ago, cyanobacteria started using sunlight to oxidize water and release oxygen. Several million years later, larger cells engulfed these oxygen -producing cyanobacteria. Gradually, the cells and the ‘trapped’ cyanobacteria became increasingly reliant on each other. Cyanobacteria started losing their genes and their autonomy. They became what we know today as chloroplasts. Each plant cell has up to 100 chloroplasts as dedicated powerhouses.

Photosynthesis is a harsh chain of reactions. It essentially uses photons, absorbed by chlorophyll and other pigments, to create an ‘electrical current’ within the cells. This flow of electrons breaks down water, releasing protons. These protons and electrons generate the energy the cells need to fix carbon dioxide and power the metabolism. But this process, which repeats itself every day in all chloroplasts, is poisonous to the cell. The process creates damaging reactive oxygen species that can destroy proteins and DNA alike. As a defense mechanism, the chloroplasts try to deactivate these molecules as soon as possible. But deactivation isn’t fast enough on sunny days, and the cell has no option but to replace damaged proteins in the photosynthesis complexes every few hours.

The protein complex that gets the most oxidative damage is the Photosystem II. This massive structure is made out of 20 different proteins and almost 100 other molecules, such as chlorophylls and carotenoids. This is the place where energy from the sun puts the electron flow into motion and generates oxygen. In the heart of the system are the proteins D1 and D2. When there is a lot of photosynthetic activity, the protein D1 protects the whole photosynthetic machinery. It is more prone to oxidative damage and gets replaced every two hours or less. By self-sacrificing, D1 prevents the oxygen species from damaging other, more sensitive proteins in the complex. 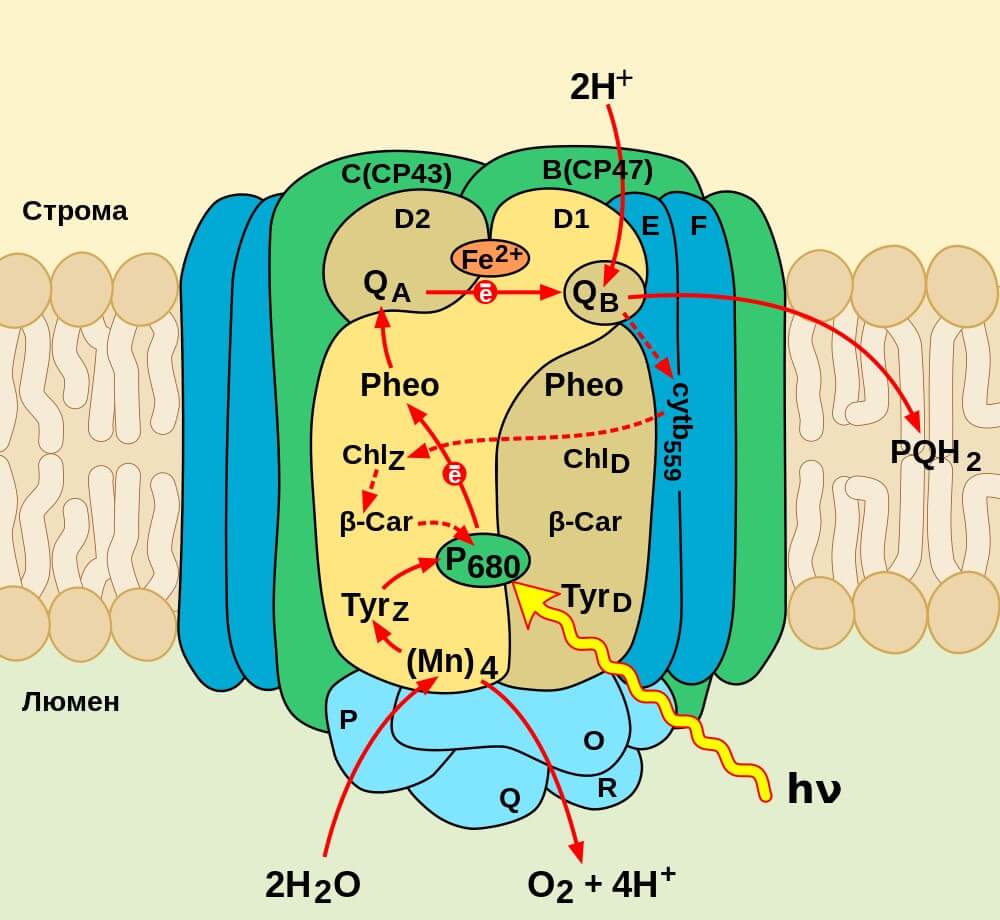 Structure of Photosystem II, where water is broken down to molecular oxygen and protons. The protein D1 is the core of the complex. Credit: Wikimedia

During summer, the length of the day is longer and the temperature is higher. This increases the photosynthetic activity of plants and consequently their growth rate. But it also increases the stress photosystems endure. Especially during heatwaves, the plants accumulate a lot of oxidative damage and the protein D1 needs to get replaced faster. Using this information, a research team from Shanghai thought of a way to possibly protect plants from heat. Their idea? Try to increase the amount of D1 protein available to the chloroplasts.

I mentioned before that chloroplasts lost most of the genes their cyanobacterial ancestors had. Being protected inside the cell, they didn’t have the same needs as a free-range microbe. But chloroplasts still have a small genome and produce a lot of their own proteins, especially the ones involved in photosynthesis. Why these particular genes stayed in the chloroplast while others disappeared is debated – an explanation could be that each chloroplast has the ability to adjust photosynthesis according to its own needs. However, the nucleus can express and direct proteins to the chloroplast.

The Chinese team, led by Fang-Qing Guo, thought that adding an extra copy of D1 at the cell’s nucleus via genetic engineering might give the plants a continuous surplus of this crucial protein. This would be a particular advantage in high temperatures and it could protect the plants from heat stress. They tested their hypothesis in three different plants: the small weed Arabidopsis thaliana – a model plant used for plant genetics – tobacco plants, and rice. 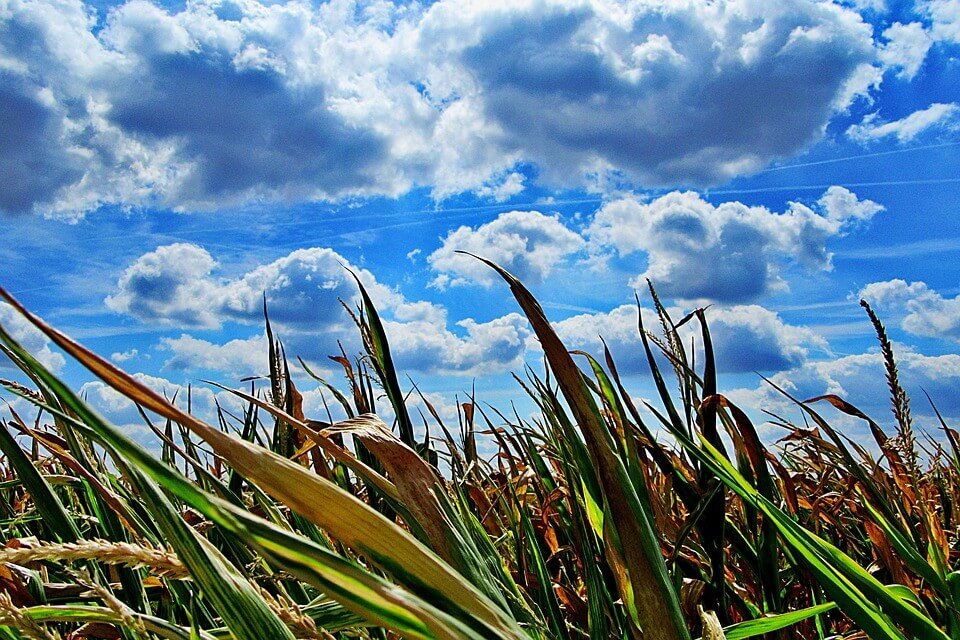 Their experiment was a success. All three species survived heat stress much better than the wild-type plants. And during the particularly hot 2017 summer in Shanghai, the transformed rice plants thrived and produced much more rice. In all experiments, the plants had bigger leaves and accumulated less oxidative damage.

But the researchers observed something unexpected. The initial thought was that the GM plants would have an advantage during heat, but would grow slower in colder weather due to the “wasteful” extra protein. It turned out this was not true. The transformed plants performed much better even under standard growth conditions. The plants with the extra D1 copy had a 17%-49% faster photosynthesis rate and produced 40%-80% more biomass. The GM rice yielded 20% more grain during field trials.

The Chinese team made a very important discovery which has immediate use in agriculture and paves the way for more applications in different crop plants. Significantly, this work couldn’t have been completed without the recent advances in plant genetic engineering. The enhancement was the result of changing gene expression by moving the gene from the chloroplast to the genome, a process that can’t happen randomly. The modification didn’t introduce a foreign gene or select for a naturally occurring variant, it just added an extra copy of D1 in a different location. This couldn’t have been achieved through traditional breeding or mutagenesis.

There has been a long-lasting debate in the plant science community over whether it is feasible to improve photosynthesis in crop plants. There have been some successful studies so far, but they mostly relied on complex genetic manipulations and may not be applicable in the crops that really matter. But this work by Guo’s group provides a roundabout way to increase crop productivity together with heat tolerance. In a world of increasing temperatures and rising population, the potential social impact cannot be stressed enough.

Kostas Vavitsas, PhD, is a Senior Research Associate at the University of Athens, Greece. He is also a steering committee member of EUSynBioS. Follow him on Twitter @konvavitsas