Following 2018’s bumper harvest for equity funding in European biotech, 2019 proved even more lucrative, particularly for private biotech companies. What are the biggest investment lessons learned from 2019, and how could Covid-19 change the dynamic in 2020?

With the coronavirus pandemic thrusting global industry sectors into chaos, investors and entrepreneurs need to understand the financial big picture now more than ever. This is also true in the biotech industry, which has been hit in both the public and private equity sphere.

When looking forward, it’s vital to first look at where European biotech investments were heading in 2019. From there, we can then make some guesses about how the industry will evolve.

In terms of fundraising, too, 2019 didn’t disappoint. One of the most outstanding examples was the colossal €4.5B collaboration deal that Gilead struck with Galapagos for rights to the Belgian company’s whole pipeline in indications such as pulmonary fibrosis. Another was the German firm BioNTech, which raised a huge €290M Series B and a €141M IPO on the Nasdaq Stock Exchange. The Danish company Genmab also pulled off a €450M Nasdaq IPO to fund the development of its antibody drug pipeline.

In addition to these huge fundraises, there were also underlying trends that could provide key lessons for biotech investors and entrepreneurs going forward. In the latest edition of our ebook, Biotech Money Insider 2020, we analyzed these trends drawn from public European biotech funding data.

Here’s a quick glimpse of some of the biggest biotech funding trends from our report, and what they could mean for the industry going forward.

When counting together private and public equity investments, European biotech companies raised a total of €6.5B in 2019. This is 30% more than the roughly €5B that was raised in 2018¹. The 2019 total also doesn’t include Galapagos’ €4.5B windfall from Gilead — around €980M of that in equity funding — because it is such a big outlier.

The €6.5B total breaks down into €3.5B in private equity funding and €3B in public equity investments. Both of these values were up from 2018, which were €3B and €2.3B respectively.

The biotech company that raised the most equity funding in Europe in 2019 was Galapagos with its single gigantic investment from Gilead. Raising just around half of Galapagos did, Ferring Pharmaceuticals’ newly founded Swiss gene therapy firm FerGene and the Dutch antibody specialist argenx came second and third. BioNTech’s combined Series B and IPO winnings placed the mRNA therapeutics developer fourth. 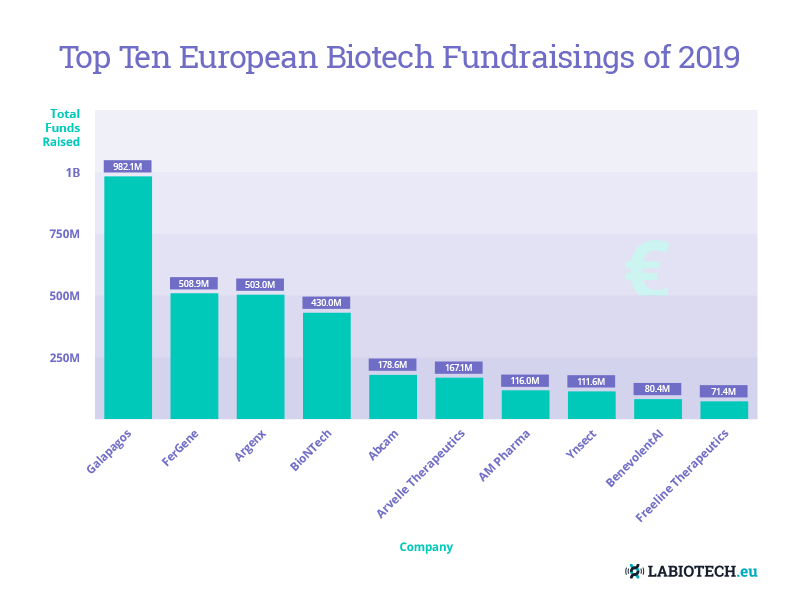 So far in 2020, investors have become more cautious amid the ongoing pandemic situation, but not completely inactive. This trend may continue in the short term, but our projections also consider the long-term possibility that investors take a lot more interest in the potential health benefits of investing in the biotech industry.

Taking everything into account, it’s most likely that biotech funding will still grow in 2020. However, the growth won’t be as high as the approximately 30% increase seen the year before.

Across sectors, companies involved in bioinformatics, analytics, and the ‘omics’ — such as proteomics, transcriptomics, and genomics — received around 25% of the entire biotech funding pie. Considering that the human genome was sequenced for the first time just 20 years ago, the omics and bioinformatics fields have very quickly become an essential component of the biotech industry.

With the rapid advancement of computational tools such as cloud-based systems and AI — as well as increasing demand for precision medicine — the omics are becoming easier to access, and, as a result, more and more prevalent. This trend is likely to get stronger as digital technology improves and becomes more integrated with the life sciences field. 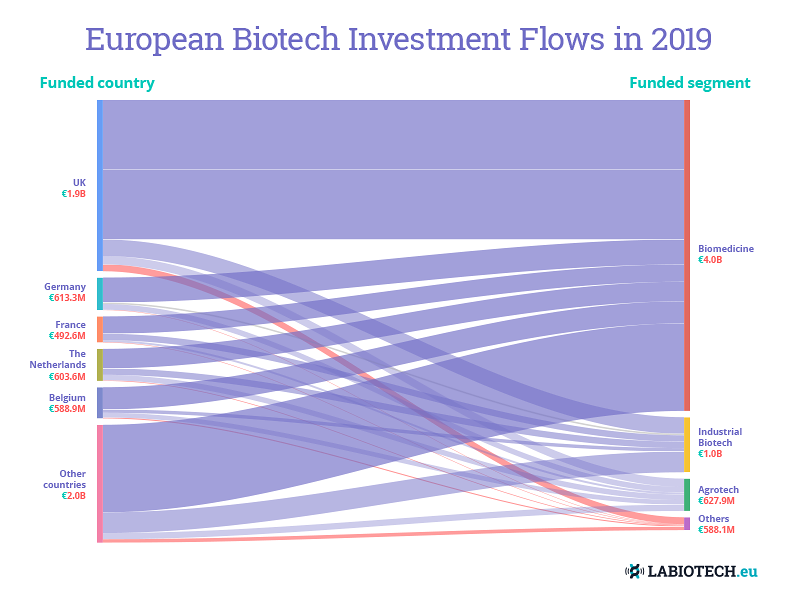 The flow of investments from the countries with biotechs that raised the most funding (left) to biotech market sectors in 2019 (all numbers in €M).

Two investors led the pack in 2019 with huge one-off investments in European biotechs. The first was, of course, Gilead, whose enormous deal with Galapagos included around €980M in equity funding. The second was the Singaporean sovereign wealth fund Temasek Holdings, which pumped €80M into the AI drug discovery company BenevolentAI.

In general, VC firms provided the lion’s share of biotech money, with angel and individual investors coming in second. The Dutch VC Life Sciences Partners was particularly prominent, leading a huge Series A of more than €150M to fund the newly launched Swiss neurology drug developer Arvelle Therapeutics. In 2020, Life Sciences Partners again made the headlines by raising the biggest European life sciences investment fund so far this year. 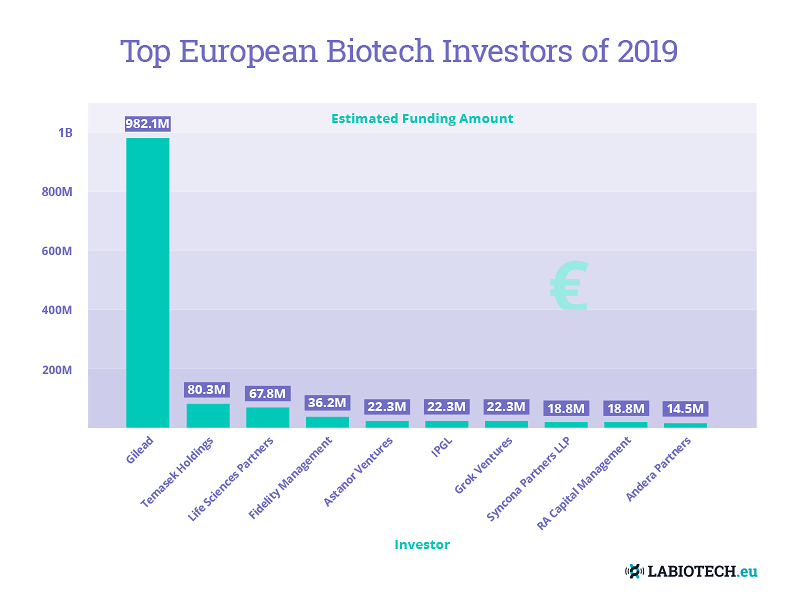 Top investors in European biotech companies, as measured by the estimated amount of euros that they contributed in 2019.

Of course, the amount invested in biotech companies is only one measure of investor activity. There were some intriguing patterns in the behavior of top investors, such as preferring early-stage biotechs, having a very uneven distribution of returns, and avoiding market bubbles.

Whether these characteristics will continue to be prominent in the future is another question. Nevertheless, this provides a useful guide for investors or entrepreneurs that would like to know more about what makes investors tick. 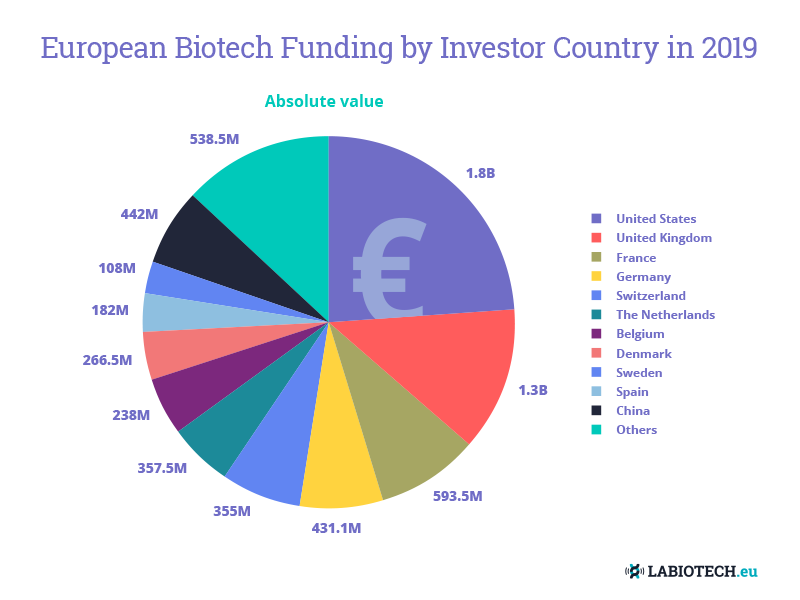 The €450M Nasdaq IPO in 2019 by the Danish company Genmab proved to be one of the biggest IPOs in European biotech history. In fact, it wasn’t far behind the enormous €530M IPO from US biotech Moderna in 2018.

Despite some record IPO earnings on the Nasdaq, shaky public markets led to some biotech IPOs that raised less than the target, such as in the case of BioNTech, and even some canceled IPOs, such as that of the Swiss company ADC Therapeutics. Worse still, the number of biotech IPOs on European public markets plummeted from eight in 2018 to just one in 2019 — the debut of Swedish Ascelia Pharma on Nasdaq Stockholm. 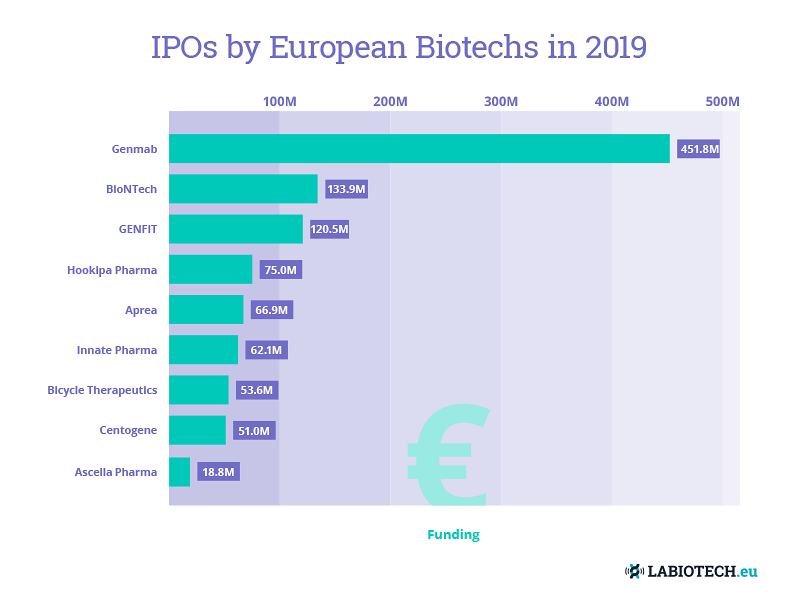 IPOs by European biotechs in 2019, ranked by the size of the fundraise.

While the IPO scene was gloomy in Europe, stocks for life sciences companies already on the European public markets actually grew in the latter half of the year, as measured by the NEXT BIOTECH index.

This growth was partly driven by successful clinical trial results for the Swiss firm Roche and German company Bayer, as well as successes in other pharma companies such as the German giant Boehringer Ingelheim. This trend, while encouraging, was a temporary affair — the index has been relatively volatile since March 2020, likely due to Covid-19. 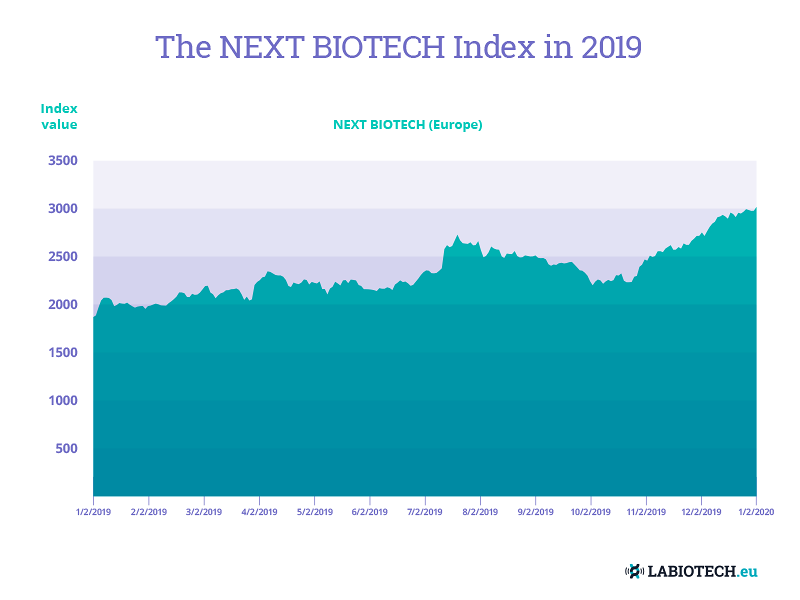 The NEXT BIOTECH index — an approximation of the European biotech stock market — grew in late 2019. Data from Euronext.

Biotech stocks can be riskier to invest in than other sectors due to the high number of regulatory and scientific obstacles to overcome in drug development. However, one potentially useful trend in European biotech stocks is that trouble in US biotech stock prices are relatively unlikely to affect them, and vice versa. This could prove a useful risk-spreading strategy for seasoned investors out there.

Given the current pandemic’s unpredictable effects on biotech stocks in Europe and globally, it remains to be seen how these trends bear out in 2020. What is certainly the case is that the stocks of big pharma companies in particular stand to gain from changing health policies and increased government spending to battle the crisis.

The year 2020 has already seen its own share of show-stopping events, headlined by the onset of Covid-19. So far, biotech hasn’t been hit as hard as other sectors, with impressive fundraises such as a €117M Series B by Immunocore and big share issues by Oncopeptides, DBV Technologies, and Bavarian Nordic.

Despite the high levels of funding going on, though, there is a potential recession on the horizon. Investors and entrepreneurs will need to collect what knowledge they can to weather this storm.

The take-home messages mentioned so far make up just a small portion of the insights on offer in our latest Biotech Money Insider 2020, which covers a huge amount of other useful information about 2019’s biotech investments. For example, it discusses investments into startups, late-stage companies, IPOs, Merger & Acquisition deals, and how these could change going forward.

We hope you gain as much use as we have from the hard work put into preparing this biotech industry analysis.

Image and figures by Catalin Furtuna, and based on analyses carried out by Ihor Kendiukhov.

Looking for ‘help’ signals in the blood of newborns with HIE

Series A Round Boosts Swedish Synthetic Biology Player by €6.4M