Biotechnology will play a crucial role in developing and delivering therapies, vaccines and antibody tests as well as diagnosing diseases.

So what would a career in biotechnology look like? We spoke to Professor Greg Foley, a chemical engineer in the department of biotechnology at DCU.

The role of biological processes in brewing, fermenting and food production. Biotechnology dates back to the earliest days of agriculture where farmers selected the best crops to grow and cross-breed. Even yogurt is produced by biotechnology. It’s also how waste and wastewater are processed.

During good economic times, biotech grads have tended to go straight into the jobs market but, during downturns – such as the current Covid-19 recession -they are more likely to stay on for postgraduate and doctoral research.

“Students often have a perception that, if they study, they will be doing lab work in quality control and assurance but they may also be involved in general troubleshooting in a plant, or doing a lot of work on documentation for what is a heavily regulated industry. They do very varied jobs and many companies run graduate training programmes where graduates may be moved from one part of the plant to another and learn about how it works.”

Foley says that DCU’s biotechnology graduates have strong teamwork and oral communications skills. “Our graduates have tended to go into business areas including technical sales where you need a deep knowledge to sell the product and support client needs. Some go into teaching, with many teaching Leaving Cert biology. And of course many go into industry. Biotech graduates have studied engineering, cell biology and bioinformatics (which uses computer science, maths, statistics and biology to analyse and interpret biological data) so they have to cope with a lot of different subjects and learn in different ways.”

Who is suited for a biotechnology course? “When I asked about why they’d studied biotechnology, I was expecting them to say they loved knowledge and want to make discoveries, but it turned out that they all wanted to make a difference, and some of them had relatives with various illnesses. Maths helps with any science subject as does computer science but even some of the good students might struggle with it sometimes.” 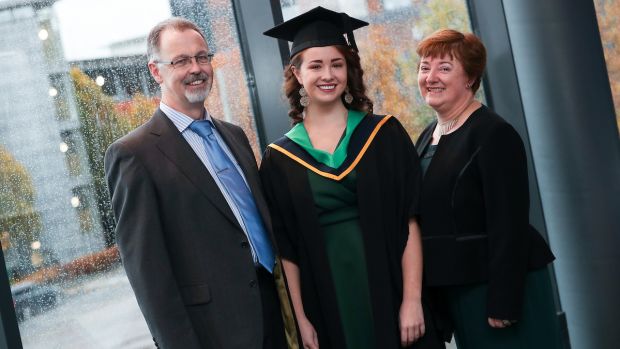 Fiona Boyle photographed on her graduation day with her parents.

“I chose biotechnology because, although I liked all my subjects, I had a particular interest in science and maths. I’d done biology and physics in school and knew I wanted to go into science – but I didn’t know exactly what type.

“At an open day in DCU, I realised it lined up with what I was interested in and that it was broad enough I could keep my options open.

“Biotechnology includes a mix of biology and engineering modules, and it’s about making biology useful enough to make products including food (beer, bread, cheese, yogurt) and medicines. It;’s about modifying cells so they produce the protein you want them to make. You do genetics and cell biology; you learn how cells can interact with one another to make processes.

“I’m currently working with MSD Ireland on protein purification, where we make proteins and separate them out from the other molecules, such as waste. The proteins can then be used to help people who are sick.

“I love working here and would hope to do a masters down the line. Biotech is expanding and growing in Ireland and I think there will continue to be lots of opportunities.”

Viewpoint: Biotechnology could save our favorite banana. Will anti-GMO activists stand...