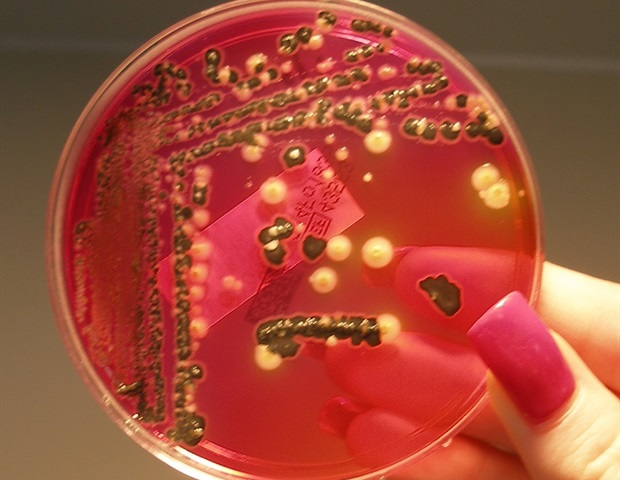 Scientists from the Vaccine and Infectious Disease Organization-International Vaccine Centre (VIDO-InterVac) at the University of Saskatchewan (USask) and Temple University (Philadelphia, U.S.) have demonstrated that a Salmonella biofilm protein can cause autoimmune responses and arthritis in animals.

Salmonella was previously thought to only form biofilms in the environment, such as on food processing surfaces. Biofilms are dense collections of bacteria that stick together on surfaces to protect the bacteria from harsh conditions, including antibiotics and disinfectants. Detecting biofilms in an animal during an infection was a surprise.

In research published today in PLOS Pathogens, a VIDO-InterVac team led by Aaron White discovered that Salmonella biofilms were formed in the intestines of infected mice. For the study, the team used a mouse model to replicate human food-borne illness and showed that a biofilm protein called “curli” that grows on the surface of bacteria was connected to negative health outcomes.

Curli are a special type of protein called amyloids. Similar human proteins have been associated with neurodegenerative diseases such as Alzheimer’s disease, Parkinson’s disease, and Amyotrophic lateral sclerosis (ALS or Lou Gehrig’s disease). Scientists don’t know how these diseases start, but have speculated that something must “trigger” the accumulation of amyloids.

“We are the first to show that a food-borne pathogen can make these types of proteins in the gut,” said White, a leading expert on Salmonella biofilms and curli amyloids.

“There has been speculation that bacteria can stimulate amyloid plaque formation in Alzheimer’s, Parkinson’s and ALS and contribute to disease progression. The discovery of curli in the gut could represent an important link, pointing to a potentially infectious cause for these diseases.”

Collaborator Çagla Tükel and her team from Temple University determined that the presence of curli led to autoimmunity and arthritis–two conditions that are known complications of Salmonella infections in humans.

In mice, these reactions were triggered within six weeks of infection, demonstrating that curli can be a major driver of autoimmune responses.”

The next step in the research is to confirm that this also occurs in humans, and test if other food-borne pathogens related to Salmonella can cause similar autoimmune reactions.

This important discovery suggests that food-borne pathogens could initiate or worsen autoimmunity and have the potential to contribute to amyloid disorders such as Alzheimer’s and Parkinson’s disease.”

Insufficient sleep could play a role in the development of type...