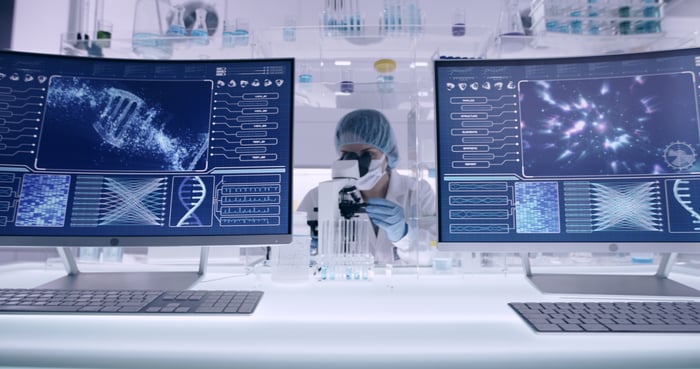 Investors bought into the stock on the news that it will be added to the S&P SmallCap 600 at the start of trading on April 4. That means that funds tracking the index will need to buy the stock, and that surge in demand is likely to raise its share price.

The good news comes on the heels of an announcement on March 25 that drove Vir’s stock price down. The Food and Drug Administration amended the Emergency Use Authorization fact sheet for sotrovimab, an investigational monoclonal antibody treatment for COVID-19, to say it was unlikely the 500-milligram dose of the treatment will be effective against the omicron BA.2 subvariant. However, Vir and its marketing partner for sotrovimab, GlaxoSmithKline, responded by saying they are preparing a data package that will support the use of a higher dose of sotrovimab against BA.2.

The $917.2 million Vir received in sotrovimab collaboration revenues from GlaxoSmithKline made up the lion’s share of its overall 2021 revenue of $1.1 billion. The FDA’s decision regarding sotrovimab doesn’t mean Vir’s revenue will disappear, as the treatment can still be used against other COVID-19 variants, but it will likely hurt sales.

The company does have a promising pipeline. In its fourth-quarter report, Vir said it plans to share data in 2022 on its phase 2 combination trial of VIR-2218 and VIR-3434 as a potential cure for chronic hepatitis B virus (HBV), and on its a phase 2 trial of VIR-2482 as a preventative for influenza A.

Investors will have to wait and see if Vir can get sotrovimab back on the EAU list for the omicron BA.2 subvariant. It’s worth noting that the company is coming off a solid year, with revenue up 133.4% year over year and earnings of $3.96 per share, up from a loss of $2.51 per share in 2020. That gives it a cushion to fund its research and development pipeline, and to continue clinical trials studying other applications for sotrovimab.

The biotech stock has dropped more than 37% this year, and the share price may already reflect investors’ concerns about whether sotrovimab will be able to drive revenue in 2022. Based on its price-to-earnings ratio (P/E) of 6.8 and its forward P/E of 6, the stock appears to be a bargain, but one that carries some risk at the moment.

This article represents the opinion of the writer, who may disagree with the “official” recommendation position of a Motley Fool premium advisory service. We’re motley! Questioning an investing thesis – even one of our own – helps us all think critically about investing and make decisions that help us become smarter, happier, and richer.